Air France pilots are set to begin their week long strike tomorrow September 15 that would lead to more than 500 flight cancellations daily. This represents about half of Air France’s daily flights. 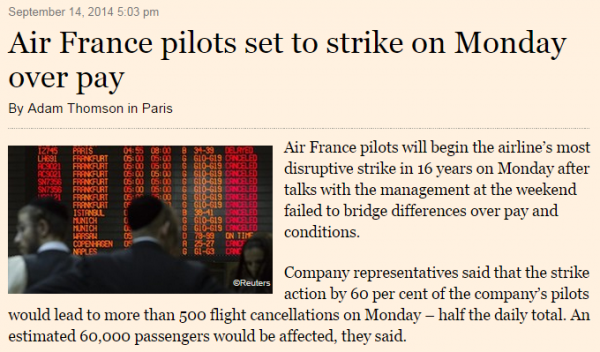 Pilots are protesting Air France’s goal of moving lot of its short-haul flying to KLM owned Transavia where employees including pilots are paid less and have not as generous working conditions.

You can read more abut this on Financial Times here and Air France’s announcement here.

Here’s an excerpt from FT:

On Sunday, Air France said that talks with unions to end the planned week-long strike were “permanent and ongoing”. But added: “We prefer to be realistic rather than optimistic. For the moment, we are organising our flights on a day-to-day basis.”

The French pilots union is demanding that workers at Transavia France, a low-cost carrier set up by Air France to compete more effectively with Ryanair and Europe’s other low-cost airlines, to have the same pay and conditions as those at Air France’s mainline business.

Air France-KLM, Air France’s parent company, plans to invest €1bn in Transavia, doubling the fleet to 100 by 2017. The expansion will include three new bases outside France and the Netherlands, with two likely in Portugal and one in Germany.

Due to the call for strike action by several pilot unions, from September 15 to 22, we expect important disruptions in our flights schedule as of Monday, September 15, 2014.

Please note that Air France flights operated by other airlines, including HOP, KLM and Delta, are not affected by this strike.

The application of the Diard law will allow us to have a more accurate estimation of the number of pilots declaring themselves on strike action 48 hours in advance.

Our flight schedule will be adapted accordingly and published at latest 24 hours ahead of departure. If you have left us your personal contact, we will be able to advise you by SMS or E mail.

The EC 261/2004 monetary compensation doesn’t apply for flights that are canceled by this industrial action, but the duty to care still dos. Air France is required to rebook you on other airlines even when on award tickets or provide refunds. They must provide hotel accommodation including meals for affected passengers.

Let’s hope that Air France and its pilot union would reach a last minute agreement to avert the action, although it looks unlikely at this point.