Marriott has started a new campaign today to urge guests to leave tips for the housekeeping staff. 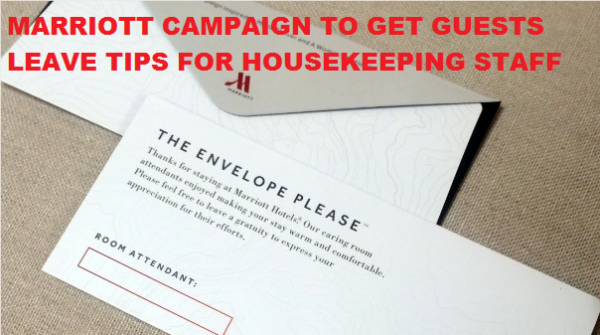 Instead of some mint/chocolates, you will find an envelope on the pillow reminding guests that they can tip housekeeping staff as well.

Marriott suggests on today’s email that guest should tip $1-$5 daily and not just at the end of the stay.

Beginning this week, a number of the company’s hotels will begin providing envelopes in guest rooms to encourage visitors to tip workers. The initiative, called “The Envelope Please,” is a partnership with A Woman’s Nation, a nonprofit organization founded by journalist and former California first lady Maria Shriver.

“In conversation with Maria, she said it had struck her that too often women are in positions that we forget to acknowledge,” Arne Sorenson, chief executive and president of Bethesda, Md.-based Marriott, said in an interview. “In a hotel, obviously we tip the bellman or wait staff. But often we don’t see our housekeepers. We don’t have that personal interaction, so we just don’t think about it.”

The American Hotel and Lodging Association, a trade association, suggests tipping housekeepers between $1 and $5 per night, and recommends tipping daily rather than at the end of a stay to ensure that the money goes to the person cleaning the room each day.

Here’s my tip to the Marriott. Pay your employees not just the federal minimum wage but a living one. Employees are happier, turnover goes down and everyone wins.

On the Washington Post piece, they refer to some local union contracts in the Washington D.C. where housekeeping gets currently paid more than $18 per hour. The national median salary for maids was $9.51 per hour, however.

The expected tipping has already gone nuts in the States. You are more than welcome to tip the amount that you deem appropriate, but “requiring” everyone to tip is just crazy.