Wall Street Journal published a feature this week on its website (access here) about cleaning of the commercial aircraft between flights and during their overnight breaks. 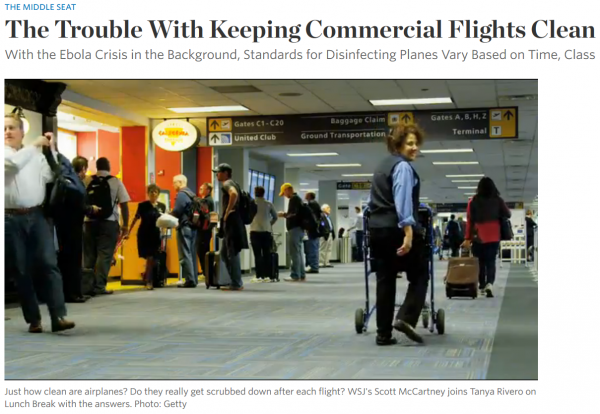 Passengers are more interested in now about the cleaning done when the Ebola outbreak is happening on Africa and many airlines are flying their planes into the region.

Here are some excerpts from the WSJ article:

It’s a murky area without clear regulatory standards. The Federal Aviation Administration says it doesn’t regulate or inspect cleaning and referred a reporter to the Occupational Safety and Health Administration, which says it has nothing to do with aircraft cleanliness. OSHA suggested contacting the FAA. The FAA then suggested the Food and Drug Administration. The FDA says it inspects food and water safety on commercial aircraft only.

Airlines say they set their own standards without regulators and give voluminous instructions to contractors. They use chemicals approved by aircraft manufacturers and conduct their own quality-control inspections.

Carriers don’t report what they spend for cleaning, but some have said they reduced costs in that area when pinched economically. They have also mentioned boosting spending on cleaning during economic recovery after customer complaints about dirty airplanes. Two years after emerging from bankruptcy reorganization, United said it would do “deep cleanings” on planes several times a year, instead of once every 18 months, after increased customer cleanliness complaints.

But while airlines know a visible mess alienates passengers, the more serious cleaning is the cleaning you can’t see. Most airlines say there’s not enough time between domestic flights to clean out seat-back pockets or wipe down tray tables—that happens in overnight cleanings.

It is amazing that some airlines can keep their planes in tip top (many of the Asian ones) order while others are severely lacking (most US airlines).

Nothing gets me more irritated that urine smell in the lavatory on a long-haul plane right after take off. This just means that the plane wasn’t properly cleaned and/or sprayed. I always laughed when United used to hang those Starbucks coffee packs (right use for them) inside lavatories as air fresheners.