Airbus released a new study today where it estimates that the airlines will purchase $4.6 trillion worth of new airplanes at list prices during the next 20 years and that the domestic China will become the single largest aviation market within a decade. 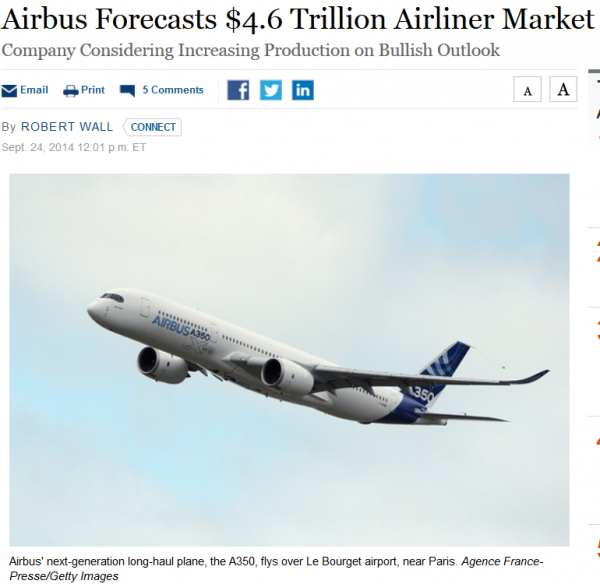 Airbus estimates that the aircraft manufacturers will deliver 31,400 passenger jets with more than 100 seats including freighters by 2033.

You can read WSJ’s take on this here and Bloomberg’s here.

The bullish outlook is matched by rival Boeing Co. The Chicago-based plane maker this summer said 36,770 jets will be delivered with a value of $5.2 trillion.

Industry experts worry the industry may be reaching a top and could be headed for a downturn if interest rates rise or global political stability shakes markets. Mr. Leahy said demand remains robust.

The Toulouse, France-based manufacturer’s long-term forecast predicts demand for almost 9,300 wide-body planes worth $2.5 trillion — 1,500 of those in the 400-seat-plus bracket occupied by the A380 — and more than 22,000 single-aisle planes valued at $2.1 trillion in the market dominated by the A320 and Chicago-based Boeing’s 737.

The overall global fleet will grow to 37,500 planes by 2033 from 18,500 today, after 12,400 older and less efficient passenger aircraft and freighters are retired, Airbus said.

The biggest shift in the demand profile will be toward larger planes as airlines seek to maximize passenger numbers at airports with limited operating slots, the company predicted.

The air travel is still rapidly growing in Asia where low cost carriers are expanding and new ones popping up all the time. These numbers that both Airbus and Boeing have put out about the future demand during the next 20 years are really optimistic.