The Federal Communications Commission (FCC) has ruled and issued a fine of $600,000 against Marriott that was found to be jamming mobile hotspots at its Gaylord Opryland hotel in Nashville. 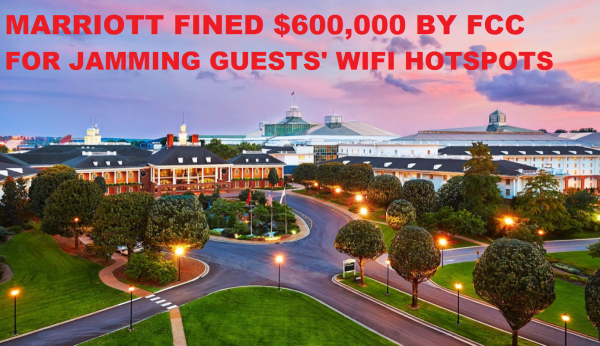 Someone attending to a conference at the hotel found out that Marriott was jamming mobile hotspots that was preventing attendees using their personal wifi networks to connect to the internet. This jamming of hotspots is illegal.

Here’s the press release by FCC:

Washington, D.C. –Marriott International, Inc. and its subsidiary, Marriott Hotel Services, Inc., will pay $600,000 to resolve a Federal Communications Commission investigation into whether Marriott intentionally interfered with and disabled Wi-Fi networks established by consumers in the conference facilities of the Gaylord Opryland Hotel and Convention Center in Nashville, Tennessee, in violation of Section 333 of the Communications Act. The FCC Enforcement Bureau’s investigation revealed that Marriott employees had used containment features of a Wi-Fi monitoring system at the Gaylord Opryland to prevent individuals from connecting to the Internet via their own personal Wi-Fi networks, while at the same time charging consumers, small businesses, and exhibitors as much as $1,000 per device to access Marriott’s Wi-Fi network.

“Consumers who purchase cellular data plans should be able to use them without fear that their personal Internet connection will be blocked by their hotel or conference center,” said Enforcement Bureau Chief Travis LeBlanc. “It is unacceptable for any hotel to intentionally disable personal hotspots while also charging consumers and small businesses high fees to use the hotel’s own Wi-Fi network. This practice puts consumers in the untenable position of either paying twice for the same service or forgoing Internet access altogether,” he added.

In March 2013, the Commission received a complaint from an individual who had attended a function at the Gaylord Opryland. The complainant alleged that the Gaylord Opryland was “jamming mobile hotspots so that you can’t use them in the convention space.” After conducting an investigation, the Enforcement Bureau found that employees of Marriott, which has managed the day-to-day operations of the Gaylord Opryland since 2012, had used features of a Wi-Fi monitoring system at the Gaylord Opryland to contain and/or de-authenticate guest-created Wi-Fi hotspot access points in the conference facilities. In some cases, employees sent de-authentication packets to the targeted access points, which would dissociate consumers’ devices from their own Wi-Fi hotspot access points and, thus, disrupt consumers’ current Wi-Fi transmissions and prevent future transmissions. At the same time that these employees engaged in these practices, Marriott charged conference exhibitors and other attendees anywhere from $250 to $1,000 per device to use the Gaylord Wi-Fi service in the conference facilities.

Under the terms of the Consent Decree the FCC announced today, Marriott must cease the unlawful use of Wi-Fi blocking technology and take significant steps to improve how it monitors and uses its Wi-Fi technology at the Gaylord Opryland. Marriott must institute a compliance plan and file compliance and usage reports with the Bureau every three months for three years, including information documenting any use of access point containment features at any U.S. property that Marriott manages or owns. To resolve this matter, Marriott will pay a civil penalty of $600,000.

The amount of money that some of these hotels charge for conference wifi set ups is borderline criminal. It’s not really a surprise that some attendees prefer using their own mobile devices to create wifi networks to access the internet, but apparently Marriott wasn’t too fond of this revenue leak.