A LoyaltyLobby reader suggested that we should have a “Fabulous Fridays” series in addition to the “Whine Wednesdays” and Sunday’s “Compensation Clinic”. And I agree 100% with the reader. 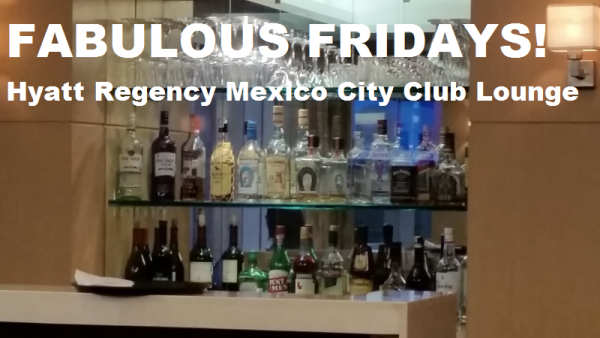 So, from now on, I will have something fabulous to write about travel loyalty programs or travel each Friday. You can always email me your suggestions.

On Wednesday, I was whining about the state of club lounges in the North America (read more here), but if you just cross the border to the south from the United States, things get better fast.

I stayed three weeks ago at the recently re-flagged Nikko hotel that has become the Hyatt Regency Mexico City, which is on Polanco’s hotel row next to the InterContinental, JW Marriott and W Hotels (I have stayed at them all) and was really positively surprised about the quality of their lounge offerings. This is by far the best that I have seen on my Latin American tour that took me to Argentina, Chile, Bolivia, Colombia, Panama, Cuba and Mexico.

Why do I think that the lounge is fabulous? I stayed there on a Friday night and was going out. Decided to have a few adult beverages in the lounge and was stunned that they have proper bar service with bartenders and that the open bar is not just  for the usual two hours in the evening but from early afternoon until 11PM. Also, the food presentation was very nice for a hotel in the Americas.

The size of hotel is monstrous as they have 755 rooms and are still renovating the top floors. The only problem that I have with this hotel and it comes from them being previously under the Japanese Nikko brand, is the small size of the standard rooms. The suites were under renovation while I was staying there, so I cannot comment about them.

How Long For The Double Hyatt Elite Nights To Post?

Another curiosity from airport tales in China was reported in the media this week as four men who were booked on a domestic flight...

Now Accepting Applications: What Does It Take To Become A $2000...

Marriott Teams Up With Sunwing To Bring 19 Resorts Under Autograph...