Avianca LifeMiles learned (thankfully) from their previous award chart changes (unannounced and denied that there had been changes at all) and announced back in July (read here and here) their new award chart that is effective on October 15, 2014. 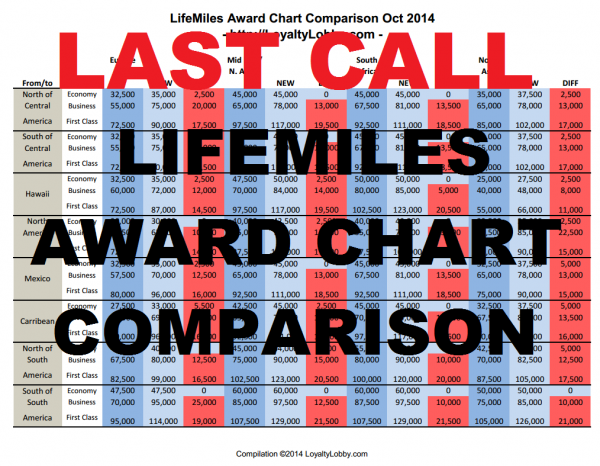 You can still redeem at the old values today and tomorrow. Note that not all awards went up. You should check route by route whether it makes sense to redeem now or on October 15 when the new award chart is in place.

Here is the comparison between the new and old award charts:

The current award chart shows the return price and the new one-way only. The numbers that are in RED show the increase in number of miles required and the GREEN ones the decrease. As one could expect, there are far more destinations with a mileage increase than decreases miles come October 15.

I have plenty of LifeMiles sitting on my account right now, but don’t have any firm travel plans that I could redeem them right now. If you have upcoming travel plans and could use some LifeMiles for them, you should compare the current and new award charts.

Watch Out For Avianca LifeMiles Expiry On July 31, 2021