I was just watching Bloomberg News and saw that the UK government had instituted Ebola screening at London’s Heathrow airport. The screenings have already started at select airports in the United States and Canada. 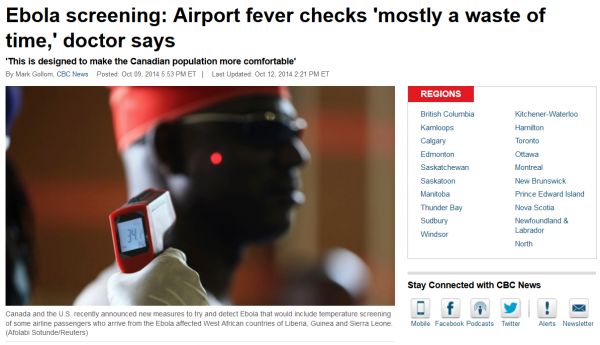 When I have been watching CNN over the past few days, it could have been as well called ENN (Ebola News Network) due to never ending coverage over the infected nurse in Texas.

There is a good piece on the CBC News website (access here) about the overreaction over the screenings and thread of Ebola in western countries:

Both governments recently announced similar new measures to prevent the importation of the virus, including temperature screening of certain airline passengers who arrive from the Ebola-affected West African countries of Liberia, Guinea and Sierra Leone.

However, a number of experts are questioning the effectiveness of this kind of screening, and whether it will make the public safer.

“Is this going to help stop Ebola from coming into the country? Highly, highly, highly unlikely.”

“I think this is designed to make the Canadian population more comfortable, when in fact they don’t need to feel more comfortable because we can handle the infection here,” Keystone says. “We may get a case or two or three. We’re not going to have an outbreak or an epidemic.”

Not just the Canadians but Americans and Brits as well.

For one, the incubation time for Ebola is between two and 21 days, meaning that those who travel soon after being infected may not exhibit symptoms. Duncan, for example, had his temperature taken three times at the Liberian airport, and all his readings were considered to be within normal levels. Passengers can also take drugs like Tylenol to bring down fever symptoms.

Good luck with the temperature screenings like they would prevent anything.

“You’re going to get people who have a lot of other conditions, a lot of false positives,” said Gostin. “It’s the peak flu season, so they’ll have the flu. Coming from Africa, they’re more likely to have malaria or tuberculosis, which mimics the symptoms of Ebola.”

Are they going to quarantine everyone that has a flu?

This Ebola situation reminds me about what was written in the Freakonomics book. People are very irrational and afraid of dying of diseases/accidents that are very or extremely unlikely to happen. What kills them are everyday diseases or habits that people actually have control over in the western countries.

Don’t get me wrong. Ebola is a terrible disease and must be stopped. You have to bear in mind, however, that malaria killed estimated 627,000 people in 2012, yellow fever 30,000 and influence 250,000 to 500,000 every year. These based on WHO figures. How many millions more die each year for lifestyle diseases such as smoking?