WSJ: “Emirates, Etihad and Qatar Make Their Move on the U.S.”

Wall Street Journal’s The Middle East columnist Scott McCartney filed an interesting piece from Dubai yesterday (access on WSJ) about the growth of the Gulf carriers of Emirates, Etihad and Qatar Airways in the United States. 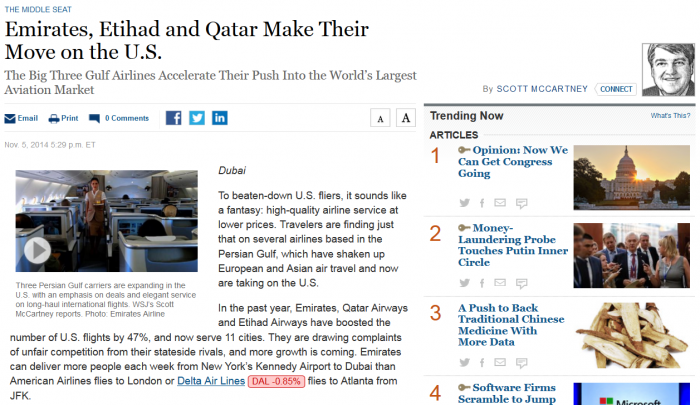 As the US airlines are incapable of competing with the new planes, entertainment, food and service they are just whining and would like to US government to renegotiate the open skies agreement between the countries.

You can access the WSJ piece here. (Note that you may have to use Google to bypass the pay wall. Just search for the article title.)

To beaten-down U.S. fliers, it sounds like a fantasy: high-quality airline service at lower prices. Travelers are finding just that on several airlines based in the Persian Gulf, which have shaken up European and Asian air travel and now are taking on the U.S.

In the past year, Emirates, Qatar Airways and Etihad Airways have boosted the number of U.S. flights by 47%, and now serve 11 cities. They are drawing complaints of unfair competition from their stateside rivals, and more growth is coming. Emirates can deliver more people each week from New York’s Kennedy Airport to Dubai than American Airlines flies to London or Delta Air Lines DAL -0.85% flies to Atlanta from JFK. 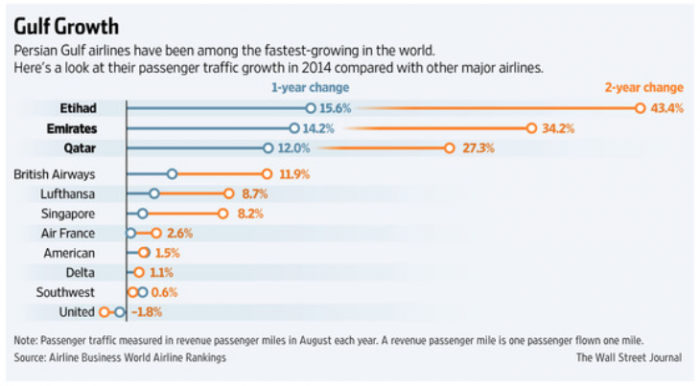 They are winning over customers with service reminiscent of the early days of flying. That means hot towels in economy, plus amenities like onboard showers in first class and a bar in business class. Etihad has flight attendants trained as flying nannies who entertain children from first class, business and economy cabins with face-painting, games, crafts and contests during flights.

U.S. airline executives are increasingly questioning whether the government should check the growth of the state-owned Persian Gulf carriers via treaty, as Germany and Canada have done, rather than allowing the current Open Skies allowance to fly anywhere.

This is a good article and worth a read. Why would you choose US or European airline over one of the Gulf rivals? Especially the US airlines are now trying to nickle and dime you on everything from checked bags to preferred seating while giving you crappy service, throwing dog food at you (if any) and charging for adult beverages.

When are the US airlines going to give you free in-flight WiFi access like what Emirates is starting to do?

These Gulf airlines are not perfect, however. The employee conditions are not the best (read about the Qatar’s issues here) and you are pretty much on your own if they screw up something. There is no customer service of any kind.