Financial Times published an article “Why luxury air travel is taking off again” yesterday about the luxury in the air. 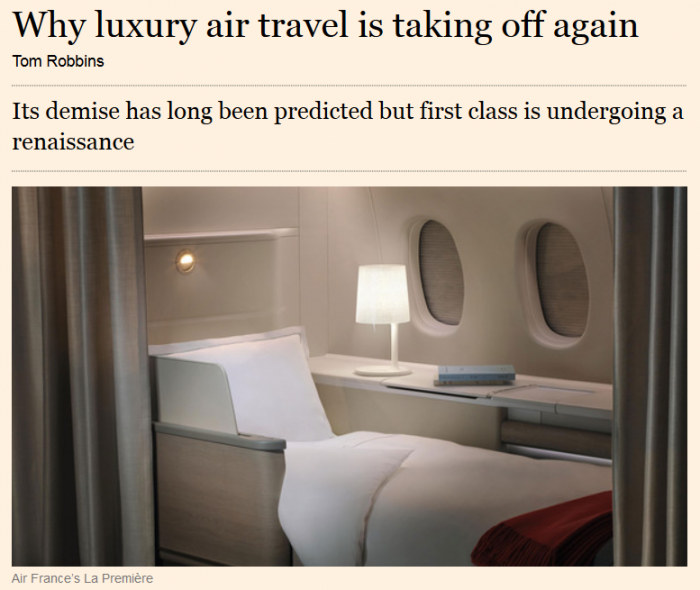 Couple of years back, it seemed inevitable that the airlines would mostly discontinue their first class products when business class offerings became mostly flat beds and direct aisle access instead of the slippery slope biz seats of the yesteryear.

Even before the financial crisis, observers were predicting the death of first class. When recession took hold, it seemed a done deal. In fact, however, the opposite now seems to be true. An analysis carried out for the FT by the aviation data company OAG shows a significant rise in the number of first-class seats in the air. At the same time, airlines are launching new and ever more lavish first-class cabins – most noticeably, Etihad’s Residence, a three-bedroom private apartment which enters service next month.

Over the past five years, first-class seat numbers have grown by 63 per cent on Air China and 127 per cent on China Eastern, according to OAG. In the Middle East, Qatar Airways has seen a 132 per cent rise, Emirates, 32 per cent. “The Middle Eastern and Asian carriers have really got something to prove, and first is such a statement about the overall quality of the airline,” says Goode.

By contrast Air France has cut capacity by 47 per cent since 2009, British Airways by 23 per cent. Celebrities and wealthy individuals have continued to fly first – and demand has been bolstered by some downshifting from private jets – but since 2008, executives have increasingly been downgraded from first to business by employers eager both to save money and to avoid appearing profligate.

This Financial Times article is a nice read if you have few minutes to spare.

Many western airlines such as Air Canada, Air New Zealand and Delta don’t offer first class cabins at all (Delta only domestically). Seems that American Airlines, United, British Airways, Lufthansa etc. appears to be scaling down the number of routes where first class product is available.

As the data gathered by the Financial Times proves, the number of first class cabin seats offered by Middle Eastern and Asian carriers have skyrocketed.