Malaysia Airlines most recent Twitter gaffe popped up on my screen this morning, as I was preparing to take their flight from Bangkok to Hong Kong via Kuala Lumpur (using one of those nice business class fares that I wrote about here). 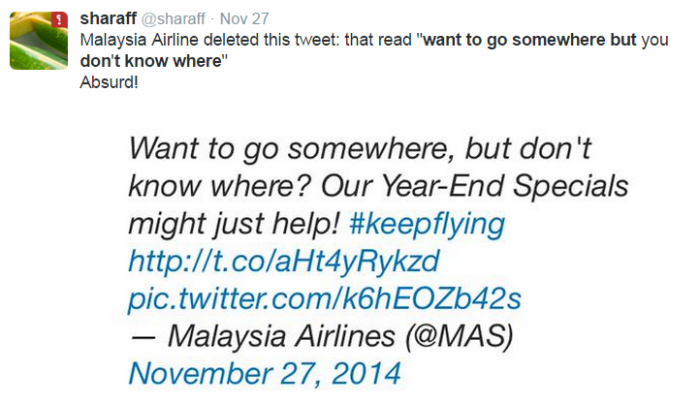 Who on their right mind would tweet something like this considering that the airline had two planes going down this year?

You can read The New York Time piece about this here and the Economist one here.

The Economist was referring to New York Times and listed the marketing gaffes that the airline has had so far this year:

As I have posted earlier, I have no problem taking Malaysia Airlines flights because the accidents that happened earlier this year were unrelated and it is difficult to blame the airline for the shoot-down of one its planes in Eastern Ukraine.

With this and the sweeping of the Indian Ocean for MH 370, you would figure that Malaysia Airline’s marketing department or their agencies would be a little more smart and sensitive with how they promote the airline after these incidents.

Malaysia Airlines Offering Unlimited Free Changes For One Full Year On Bookings Made By JUN 30, 2020

Virgin Atlantic Collapses By The End Of May Unless New Cash...

Liquidity Issues Confirmed: Is Germany’s Lufthansa About To Go Bust Without...

AirFrance KLM Is The First European Airline To Secure A Sizable...