The Economist has an interesting piece about the current and past low cost airlines that have tried to break into the long-haul flying and mostly failed (so far). 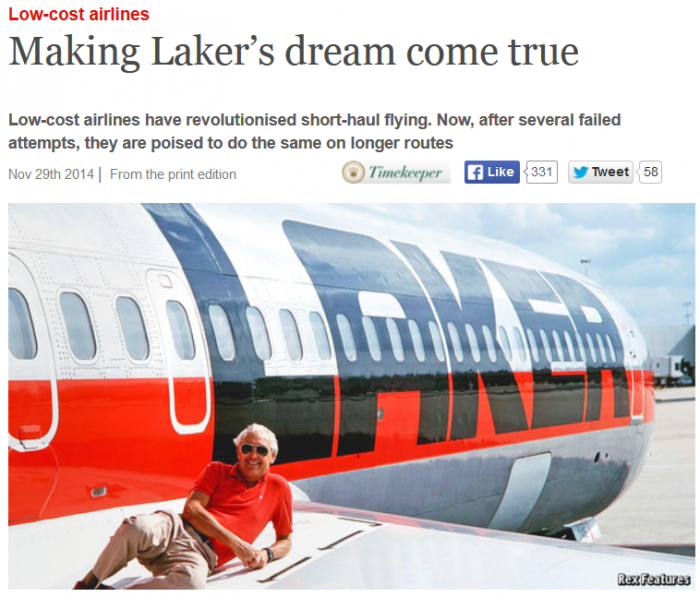 The article suggests that the next generation of aircraft from both Boeing and Airbus would make these flights feasible.

Here’s an excerpt from it:

In Laker’s day, the fuel burned by long-haul planes made up a large proportion of the cost of operating the flights. That made it hard for budget carriers to find enough cost savings elsewhere to cut prices sufficiently to tempt flyers to switch from carriers offering more comforts.

This is now changing, with the launches of some new and far more fuel-efficient planes: Boeing’s 787 Dreamliner, already in the air, Airbus’s A350, which will start flying within weeks, and a revamped version of Airbus’s A330, coming in 2019. Ryanair’s boss, Michael O’Leary, recently reiterated a promise that he would eventually sell transatlantic flights from as little as €10 ($13) one-way and with average return fares of around €200-300. The full-service airlines will also be ordering these new planes, but their cost disadvantage compared with the nimble budget carriers (because of such things as their legacy pension schemes and labour agreements) will become more stark.

I have no problem taking a low cost carrier such as AirAsia or LionAir on short’ish flights of a couple of hours, but I am not convinced that I could endure them on flights of 10+ hours.

The model for these long-haul flights without connecting traffic at either end has mostly failed. Even AirAsia is now selling through flights that connect from one of the short-haul ones to the AirAsia X’s long-haul ones.

Many passengers based their purchase entirely on price (I am not one of them) without paying any attention to possible ancillary fees such as paying for the water (Norwegian tried this even on their long-haul flights) or a checked bag.

I am all for the competition as long as it is fair. It keeps the current “full” service airlines on their toes. I am glad to pay bit more and have all the services bundled in the price.

Has US Airways Stepped Up Dividend Miles Account Audits?