TripAdvisor was fined €500,000 by the Italian antitrust authority for failing to curb fake reviews on its website. 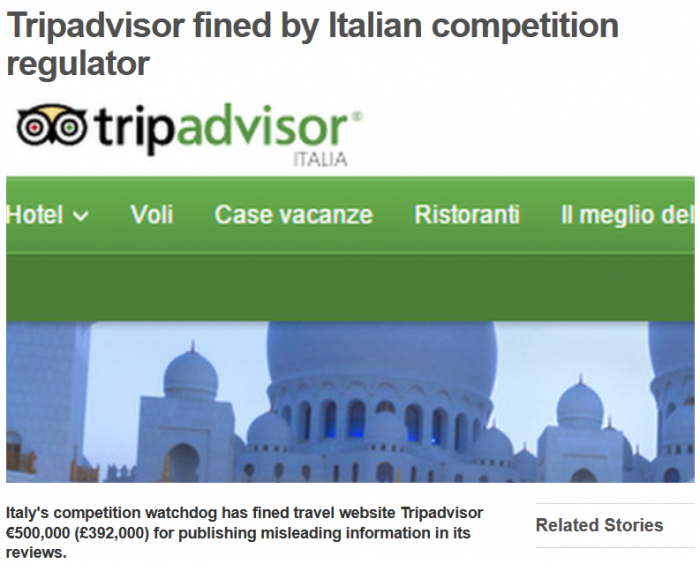 The watchdog found that TripAdvisor misleads consumers by stating that the reviews on its website are “authentic and genuine”, although it has not done much to prevent fake reviews left by both consumers and businesses.

You can access Financial Times piece about this case here, BBC’s here and CNN’s here.

READ MORE: TripAdvisor’s Guide To Hotels: How To Get Unfavorable Reviews Removed

Here’s and excerpt from Financial Times:

The move follows complaints from hoteliers of negative and, in some cases, defamatory reviews regarding their businesses. Italy is the world’s fifth largest destination for international tourism, with about 46m visitors in 2013.

The regulator said TripAdvisor, whose website allows readers to leave reviews of restaurants and hotels around the world, should stop “publishing misleading information about the sources of its reviews”, adding that the practice started in 2011. It gave the company 90 days to respond.

Nasdaq-listed TripAdvisor disputed the decision and vowed to appeal the ruling. It said it was a “force for good” and its systems were “extremely effective in protecting consumers from the small minority of people who try to cheat our system”.

READ MORE: TripAdvisor Censoring/Not Publishing Reviews? (Not What You Would Think)

In its response, TripAdvisor said it took aggressive action to fight fraud and had adequate systems in place to prevent it.

It complained that the Italian watchdog’s “zero tolerance” rules meant it would be liable to the same punishment even if just one review out of millions was deemed questionable.

“From our initial review we believe that the ICA’s recommendations are unwarranted and out of touch with commercial realities, not just of a user-generated content business, but of any company in any sector,” it said.

“The bottom line is, if people didn’t find the reviews helpful, they wouldn’t keep coming back to our site.”

TripAdvisor makes its money by selling ad space for hotels and directing bookings to hotel websites. Anyone who thinks that TripAdvisor is a neutral review platform is naive.

I would say that there are far more fake positive reviews left by business or left from their behalf than fake negative ones.

I sometimes quickly browse the negative feedback left about the hotel because they tend to be far more accurate that the positive ones left by the reviewers when judging the quality of the property. I just cannot believe the number of positive reviews left for less than stellar properties.

There was news coming out of New Zealand today where the local media was reporting that the country's external border may stay closed for...