The New Yorker: “Why Airlines Want To Make You Suffer”

The New Yorker magazine had an interesting piece this week “Why Airlines Want To Make You Suffer” about the airline/airport experiences that don’t come as a surprise for any frequent traveler. 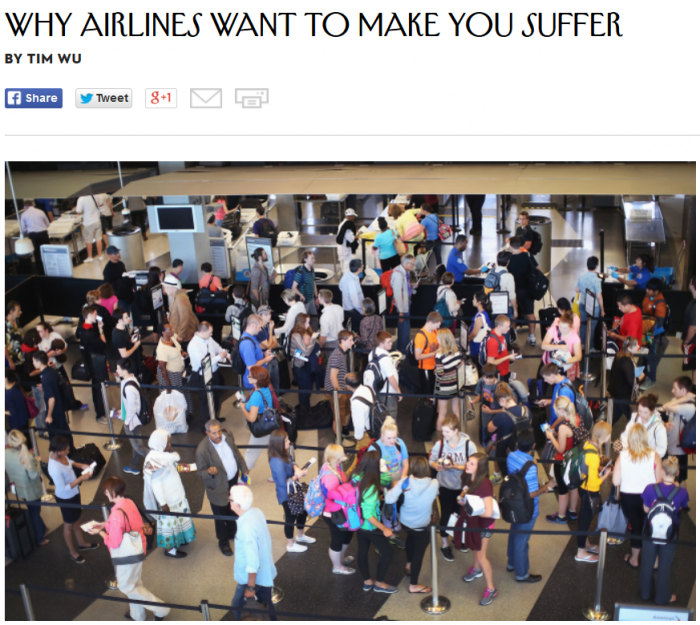 The author argues that the airlines have made the experience so bad that the only way to come through from the experience is to give in and pay extra fees for “optional” services.

The necessity of degrading basic service provides a partial explanation for the fact that, in the past decade, the major airlines have done what they can to make flying basic economy, particularly on longer flights, an intolerable experience. For one thing, as the Wall Street Journal has documented, airlines have crammed more seats into the basic economy section of the airplane, even on long-haul flights. The seats, meanwhile, have gotten smaller—they are narrower and set closer together. Bill McGee, a contributing editor to Consumer Reports who worked in the airline industry for many years, studied seat sizes and summarized his findings this way: “The roomiest economy seats you can book on the nation’s four largest airlines are narrower than the tightest economy seats offered in the 1990s.”

Well. There haven’t been much positive news for the frequent fliers either as of late either. It seems to be the race to the bottom and who can collect the most ancillary fees. This is especially the case with the US airlines, although the concept seems to be spreading to Europe as well.

I actually gave in and paid extra to get an exit row seat on an AirAsia flight this coming Tuesday. The price with the fee was still roughly half compared to the full service airlines and the schedule good.