This appears to be one of those yearly Whine Wednesdays pieces, but the internet connectivity is really becoming an issue even for a Western travelers or expats that used to be able to bypass the “Great Firewall of China” relatively easily. 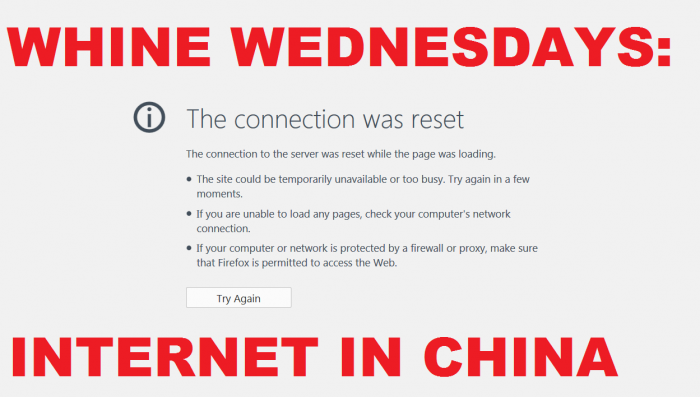 Before of my current trip to China, I did see some reports on media that China had started to more aggressive blocking that was preventing many accessing Google’s Gmail when in the mainland.

The blocking has really become very aggressive and I have an issue connecting to foreign POP’s using the VPN software that I use. The connection usually is successful, but goes down after few seconds.

Also, seems that China has disabled the use of Google Maps and Google Play on Android powered smartphones that were both accessible on my previous trips.

The problem is that many apps use Google’s API’s and thus just don’t work. The SPG app was useless, but the mobile website was working, however.

I have now been able to get the VPN work by connecting/disconnecting numerous times using various locations and wasting way too much of my time. Once the connection is up, it tends to work exactly like on my previous trips (no issues).

So, if you are planning a trip to China anytime soon, be prepared to give up on many apps and websites that you use, as they are either blocked by the firewall or unusable due to API calls to such websites

On a side note, seems that LoyaltyLobby is currently not accessible from China due to use of Google’s technology. Previously, it took quite some time for the pages to load due to Facebook and Twitter, but they did load after those calls timing out. Need to look into getting some solution for the current situation. Any ideas?