United Airlines flight 869 San Francisco to Hong Kong back in July 2014 was canceled after 13 flight attendants refused to work on the flight based on the safety risk. 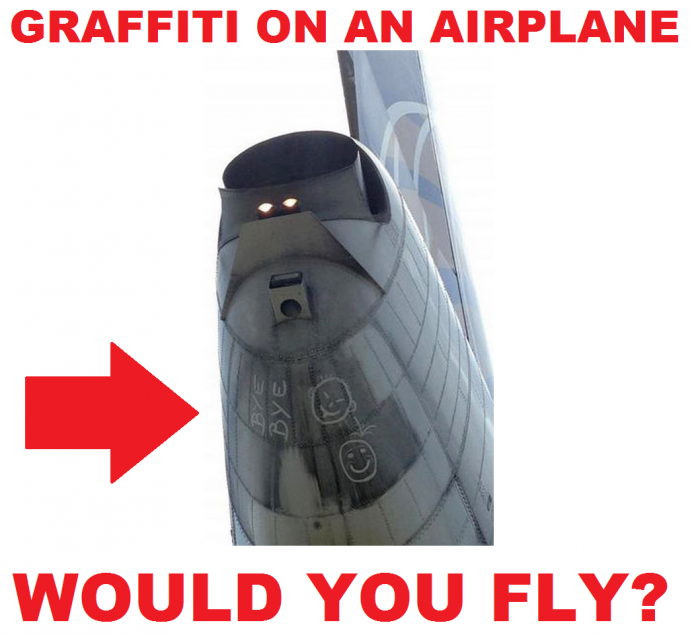 The words “bye bye” and two faces were painted on the tail of the plane. United Airlines and the pilot deemed the aircraft safe to fly.

You can read more about this incident on Bloomberg’s website here.

United canceled Flight 869 after the crew declined to work the trip and terminated the employees in October after a series of hearings, according to the complaint.

When the images were discovered, the airline should have checked the entire jet, not just the auxiliary power unit, according to the complaint. The unit is a small turbine that drives a generator mainly for power on the ground.

With the 747 in a secured area of the airport and the graffiti on the tail about 30 feet off the ground, the images should have triggered a more-comprehensive reaction, according to the complaint. A pilot’s suggestion to the crew that images were applied when the plane was in South Korea before arriving in San Francisco should have raised alarms about safety in that country, the attendants said.

“The flight attendants did not make a decision that United could not fly the plane,” the attendants’ attorney, David Marshall at Katz, Marshall & Banks LLP in Washington, said in a telephone interview. “They just decided that they were not going to endanger the passengers, themselves, the crew.”

Obviously, there had been a safety breach or someone thought that these words and graffiti would have been something non-nefarious. Although I am not superstitious, I probably would have preferred to fly on some other aircraft on that date and do side with the flight attendants.