Wall Street Journal’s The Middle Seat released its yearly scorecard for the 8 biggest US airlines. 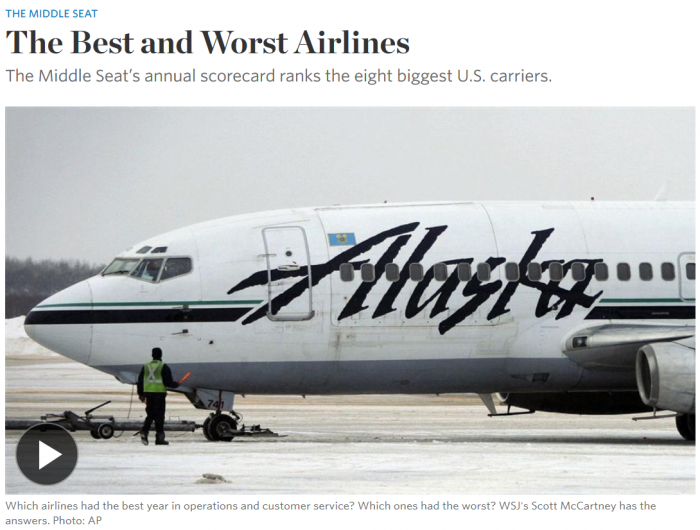 The scorecard tracks seven different measurements from DOT complaints to onetime arrivals to come up with the rankings.

You can access the WSJ article here. Note that it may be behind a paywall. If that is the case, just do a Google search with the title “The Best and Worst Airlines WSJ” it should come up.

Here’s the scorecard and an excerpt from the article:

U.S. airlines canceled nearly 66,000 more flights last year than in 2013, and the percentage of canceled flights jumped to 2.7% from 1.9% the previous year, according to flight-tracking firm FlightStats Inc. The year got off to a bad start with polar-vortex weather hammering the East Coast and Midwest. In both January and February, the Department of Transportation reported more than 5.5% of all flights were scrubbed. The number of complaints filed with the DOT over airline service shot up 26% last year.

The results are surprising in a year when carriers are posting record profits on high fares and lower fuel costs. Airlines have been investing in new technology, both in the air and on the ground, that helped boost reliability. But the 2014 service setbacks show how fragile U.S. air transportation still is. A few disruptions triggered airline meltdowns, leaving passengers stranded for days. And old equipment is failing more often under increased passenger loads: Southwest Airlines says its baggage belts suffered a lot of breakdowns that left luggage in huge piles.

I believe that this is quite truthful picture of the state of the US airlines overall. The United is on the bottom of the rankings and American Airlines (including US Airways) is the second worst.