The US airlines traditionally have had very good employee perks such as close-to-free stand-by travel on their own and partner airlines. 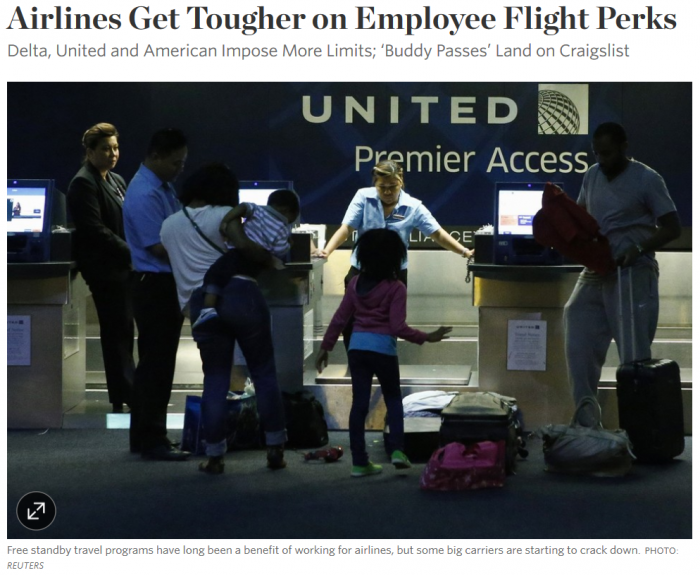 The airlines have sold the “travel perks” as a major part of the otherwise rather low remuneration package for most employees.

The Wall Street Journal had a piece yesterday about the employee abuse of these programs and how airlines might tighten them. You can access the entire piece on WSJ here and below is an excerpt:

The skies are getting less friendly for “buddy passes” and other airline employee travel perks.

Nearly free standby travel programs have long been a benefit of working for airlines. Millions of people fly every year under these programs, which extend to current employees and their immediate families as well as airline retirees and their families. The programs also make available inexpensive “buddy passes” that employees and retirees can dole out to friends.

Abuse of the programs, however, has cost the carriers money and has even facilitated criminal activity, and some big airlines are starting to crack down.

Both Delta Air Lines Inc. and United Continental Holdings Inc. warned their employees last year that workers caught abusing the privileges could face termination. United’s memo, last month, said that within the past year more than 100 people were fired “due to fraudulent activity related to buddy passes,” primarily for overseas travel.

The employees usually have access to free (have to pay only taxes) travel when they fly on their home airline and US airlines also allow business and first class travel when space is available.

When employees travel on other airlines, they usually use Z or ID90 fares. Z fares are set at certain level and ID90 means 90% discount off of the full Y/C/F fare for the route. Employees often pay for regular tickets around the holidays when they want to fly on certain dates and don’t have flexibility.

It is extremely unwise for an employee to abuse travel perks including selling of these buddy passes, as they may soon find themselves to be an ex-employee.