The United Airlines award tickets issued through MileagePlus come with lots of flexibility. After Continental took over United, now you unfortunately have to babysit them. 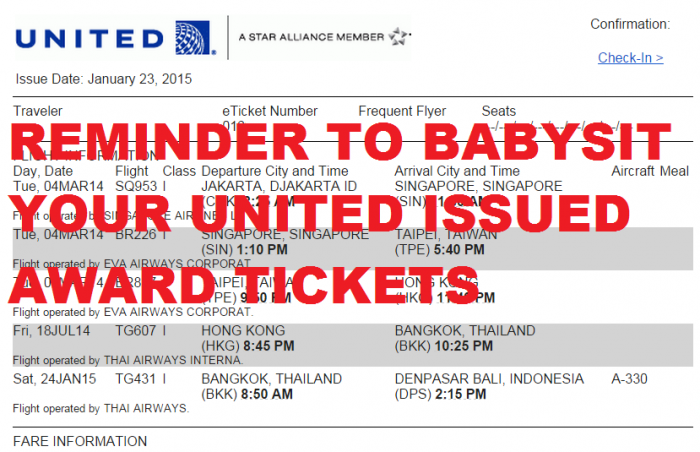 Before the last devaluation roughly a year ago, I issued business class award CGK-SIN-TPE-HKGo-PEK-BKKo-DPS that I ended up changing couple of times.

Due to the military coup, Air China downgraded the equipment between Beijing and Bangkok from a widebody internationally configured aircraft to a single aisle one and I decided to take a direct HKG-BKK on Thai Airways instead.

I had booked the BKK-DPS segment for some random date in late 2014 that I ended up not using. As my plans were firming up late last week, I rang United on Friday to book the last remaining unused segment for Saturday.

Here’s where the problems started. The agent claimed that Thai Airways had reported the segment flown on October 15. I had to dig my records that showed that I had been at the Park Hyatt Toronto that night, so impossible that I would have flown it.

The agent was then going to transfer my call to Customer Relations. Customer Relations was able to see that Thai had just rolled over my no-show to a wrong category. Instead of no-showing me they had rolled it over to flown.

The first agent then confirmed the flight for Saturday and said that she updated the itinerary and reissued it. I received couple of emails with an updated eticket receipt that still showed the October date for the BKK-DPS segment. I really didn’t think too much about this, because the segment stayed the same, Thai Airways could have just updated their PNR with the eticket number that had the segment unflown.

When I then tried to do an online check in for the flight, the Thai Airways website indicated that there were some issue with the record and that I would need to check in at the airport.

I decided to ring United again and the agent found that the ticket hadn’t been reissued correctly. Once the agent fixed the record (again) and I received the updated eticket, I was then able to check in online with Thai.

I just hate dealing with United Airlines, which became very difficult after the Continental takeover. I have never had as many issues with etickets and issuing awards than after this (disastrous) merger that still hasn’t been implemented properly.

I have must have spent 3 to 4 hours with United over the phone with this simple itinerary that originally took more than an hour to book. One of the original agents was claiming that Singapore Airlines is not a United partner and, when I questioned her over this, said that she knows what she is doing (obviously not).

When I wanted to switch for the direct HKG-BKK flight instead of going via PEK, the “system” wanted to charge an additional 10K miles and took forever for ever to have it fixed (1 hour+).

These latest two phone calls took 45 minutes to an hour.

There must be a better way for United to handle these award tickets. If a simple award such as the one I had takes 3 to 4 hours to complete with some changes, the processes with the airline are seriously flawed and the time of the agents seriously wasted.

And had I just shown at the airport for the Thai Airways Bangkok to Denpasar segment, I would give a fifty-fifty chance that we had been able to fix it at the time of checking in. Alternatively, Thai would have just denied me boarding because of the mess with the United issued award ticket.

A friend of mine was flying from Asia back to the US on a United issued award ticket that had some Air China segments. Everything had looked just fine on United.com only to find out couple of days before the scheduled return that Air China had somehow dropped the segments. It took him several hours to have the ticket fixed.