Qatar Airways announced that it as bought 9.99% stake in the International Consolidated Airlines Group, better known just as IAG, that is the parent of British Airways, Iberia and Vueling. 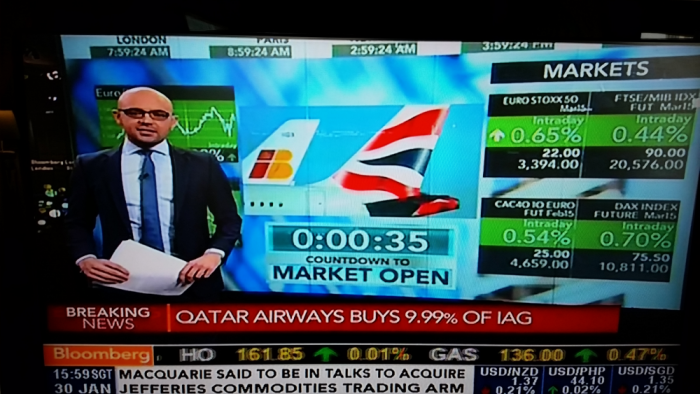 The stake is worth roughly $1.7B. IAG is currently in negotiations buying Ireland based Aer Lingus.

You can read more about this on Bloomberg’s website here and below is an excerpt:

The Middle Eastern carrier may consider increasing its stake further over time, Qatar said in a statement today. Qatar is limited to a 49 percent stake in a European carrier if it wants to preserve the target company’s landing permits, and the airline said it wants to stick to its current holding for now.

The deal follows investments by regional rival Etihad Airway PJSC, the No. 3 in the Persian Gulf, which has sought to expand its global footprint by adding holdings in airlines including Air Berlin Plc and Alitalia SpA. Emirates, Qatar Air and Etihad have used their geographic position at the crossroads of global flight paths to funnel more traffic through their hubs, with Dubai taking the crown from Heathrow last year as the largest airport for international traffic.

“IAG represents an excellent opportunity to further develop our Westwards strategy,” Chief Executive Officer Akbar Al Baker said in the statement. “It makes sense for us to work more closely together in the near term.”

The British Airways was the Qatar Airways sponsor for joining the Oneworld Alliance back in 2013. Al Baker, head of Qatar Airways, and Willy Walsh, head of IAG, are known to have cosy relationship.

Of the Gulf Airlines of Emirates, Etihad and Qatar, the Etihad is known to purchase minority shares of number of airlines (Airberlin, Aer Lingus, Alitalia, Virgin Australia etc.). Maybe Qatar Airways is now following their lead and goes shopping for minority shares as well?

Airfare of the Day [QSuites] QATAR AIRWAYS Stockholm to Bangkok from 1,379€