Lufthansa pilot union gave a notice to the airline that its Germanwings pilots would be on strike for 48 hours starting on February 12 at midnight CET. This doesn’t affect Germanwings flights that are operated by Eurowings. 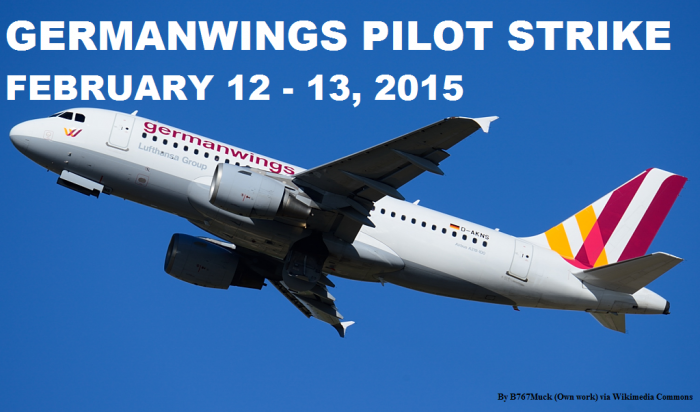 The airline claims that it can operate 60% of the 900 or so daily flights representing 80% of the passengers by using management personnel and possible charting flights. Expect wide disruptions nevertheless.

You can access Germangwings web page for flight cancellations here and below is an excerpt from WSJ piece that you can access here.

The pilots union, Vereinigung Cockpit, late Tuesday said it is calling on pilots to strike for 48 hours from midnight Thursday local time through Friday. All of the unit’s flights in Germany will be affected, the union said. A spokesman for the union blamed the action on a failure of talks this week with the airline’s management over labor terms.

Lufthansa’s earnings for last year have been hit by repeated work stoppages. The German carrier last month said it won a pay deal at the short-haul unit Eurowings. Disagreements with other pilots remained though.

Lufthansa’s pilots had number of strikes last year that just seem to continue in 2015. The pilot union is not backing from relaxing the early retirement benefit that kicks in at the age of 55, although the change would only affect new hires.

Considering the expected life expectancy today and the fact that this would only affect pilots that are hired under the new contract, it is difficult to side with the pilots.

Remember that the EC 261/2004 compensation scheme doesn’t apply in case of strikes but the duty to care does. If your Germanwings flight is canceled, you should contact the ticketing airline or the agent that issued the ticket and request that they move you to other airline. Sometimes this is easier if done at the airport directly with the airline.