Yesterday, many were booking tickets originating from the UK on United’s website having the country set to Denmark.

Due to a currency conversion error, the price in Danish Kronor (after converted to USD) was about $100 for a first class ticket when it should have been $10K instead. Many had their tickets issued only to find out later that the tickets had been canceled by United.

You can read more about this incident on the Guardian’s website here and below is a short excerpt:

In a statement, United said: “United is voiding the bookings of several thousand individuals who were attempting to take advantage of an error a third-party software provider made when it applied an incorrect currency exchange rate, despite United having properly filed its fares.

“Most of these bookings were for travel originating in the United Kingdom, and the level of bookings made with Danish Krone as the local currency was significantly higher than normal during the limited period that customers made these bookings.”

Given the price of first class tickets, even if the number of customers taking advantage of the glitch was at the low end of the “several thousand” number, the company’s potential losses were still easily in the tens of millions of dollars.

Here’s what typical eticket receipt showed as a price breakdown (thanks for a reader who forwarded it to me): 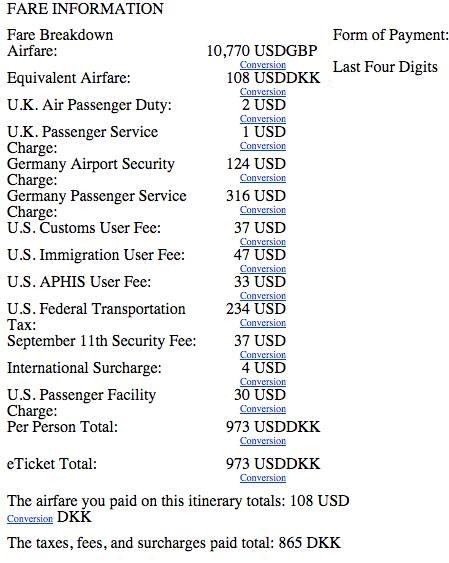 United was referring to a third party software provider on their official response, that is probably IATA or Amadeus. IATA sets the conversion rates from various currencies using NUC’s and someone must have input a wrong value for GBP to DKK conversions.

EDIT: A reader send me a comment that it was probably neither IATA nor Amadeus at fault here, but a third party that United or their subcontractor uses to update BSR’s (Bank Selling Rates) that is used to convert the fare from country of departure to country of purchase.

I made a decision long time ago not to write about mistake air fares and hotel prices. These are increasingly not honored and sometimes you may only find that out at the time of trying to board the flight. Understandably, many blogs copy/paste the info from various websites to generate page views and lure less-seasoned travellers into an illusion that they’ve hit the jackpot.