There has been two very near misses one with Turkish Airlines in Kathmandu yesterday, where an Airbus A330 plane skid off a runway, and the second one with Delta Air Lines today in LaGuardia, where plane veered off the runway.

Luckily there have been no fatalities, but both airports ended up closed and inconveniencing passengers trying to reach Kathmandu in Nepal and New York’s downtown LaGuardia airport.

You can read more about the Turkish Airlines incident on WSJ website here and on the Delta one on New York Times here.

Here’s an excerpt from WSJ News about the Turkish Airlines one in Kathmandu (access the full story here).

A Turkish Airlines jetliner veered off the runway in Nepal on Wednesday morning with no injuries to passengers or crew, or damage to the body of the plane, according to civil-aviation officials.

Flight TK726 was on its way to Katmandu, Nepal’s capital, from Istanbul carrying 227 passengers and 11 crew members when one of its wheels left the runway and hit a grassy area while landing at Tribhuvan International Airport, according to Purna Chudal, an official at the airport. All the passengers and the crew members are safe, he said.

It was the latest in a string of incidents across Asia in recent years as air travel has expanded rapidly alongside surging tourism, raising safety concerns.

Budget constraints, limited technical expertise and nagging personnel shortages have hampered safety initiatives in many parts of Asia experiencing growing traffic. In some instances, airline-safety experts say, the sheer pace of growth makes it difficult for airlines and regulators to react quickly to changes without major investments.

And and excerpt from the Delta La Guardia incident on New York Times (access the full story here). 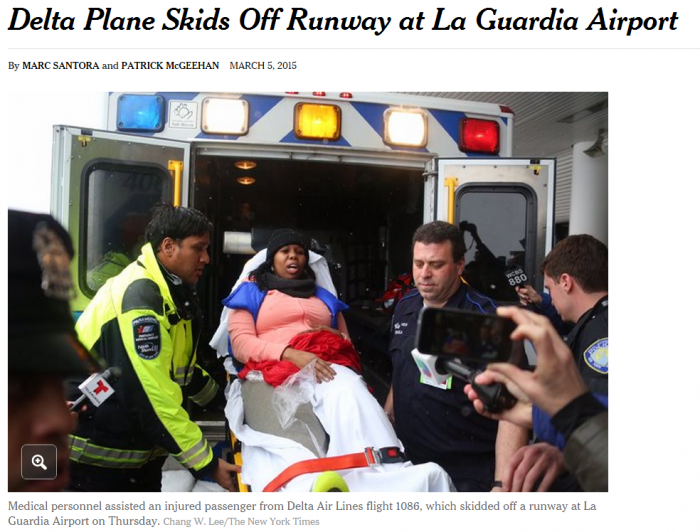 The Federal Aviation Administration said that the flight was Delta Air Lines 1086, an MD-88 aircraft that slid off Runway 13 after landing around 11:10 a.m. It was arriving from Hartsfield-Jackson Atlanta International Airport, where it took off shortly after 9 a.m.

The runway was plowed shortly before the plane landed, Mr. Foye said.

At 11:05 a.m., only minutes before the crash, he said, “two planes landed and reported good braking actions on the runway.”

He would not speculate on the cause of the accident, and said members of the National Transportation Safety Board were on their way to the scene to lead the investigation.

Runway 13 is 7,000 feet long, and Mr. Foye said the plane began skidding just beyond 4,000 feet. At the end of each runway, the F.A.A. mandates that there be an engineered materials arrestor system, known as an EMAS, to stop a plane should it overshoot its landing.

However, this plane veered off in the middle of the runway and was slowed from plunging into the water by an earth berm “designed to keep Flushing and Bowery Bays from flooding the airport during times of tidal surge,”according to a New York state website.

Nepal is not unknown for airline related accidents. Every once in a while there is a local plane going down. Turkish Airlines and Delta Air Lines both had much luck. The outcome for both flights could have been disastrous with many fatalities.