Seems that the military junta that threw out the elected government in Egypt no longer wants individual tourists to visit the country either, as the visa-on-arrival is going away on May 15, 2015. 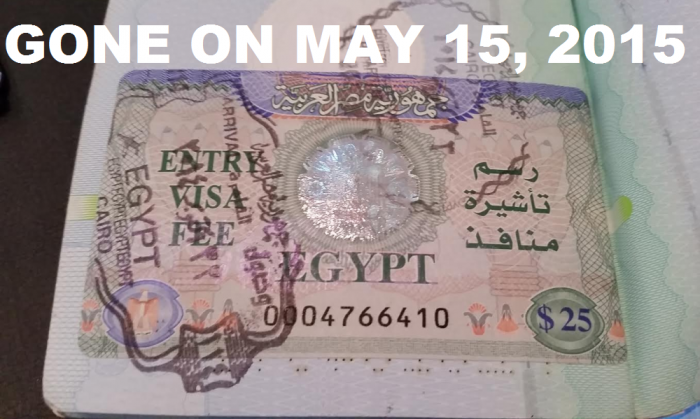 Visa-on-arrival has been available for $25 single entry or $35 for multiple entry one. You just had to purchase a visa sticker that immigration then stamped.

You can access Reuters piece about this change here of which below is an excerpt:

Egypt is tightening rules for visas by requiring individual visitors to obtain them at embassies instead of on arrival at Egyptian airports, the Foreign Ministry said on Tuesday, a move that may make it harder to revive the tourism industry.

Security sources, however, said the decision arose from a need to give intelligence services more time to assess individuals who want to visit Egypt, where security has suffered from an Islamist insurgency centered in the Sinai region.

“The system remains unchanged for tourist groups which can obtain visas at airports, but individuals have to get a prior visa from embassies,” Foreign Ministry spokesman Badr Abdelatty said.

The changes will take effect on May 15, said Rasha Azaizi, the tourism minister’s media adviser. “The decision will have a small effect… The industry depends on the large groups brought in by tour operators,” she told Reuters.

Egypt’s economy has been hammered by a precipitous fall in tourist visitors and a lack of foreign investment because of protracted political upheaval since the 2011 popular uprising that toppled autocrat Hosni Mubarak.

The tourism sector has been already hard hit due to the political turbulence in Egypt. Seems that the numbers are already so down that the government doesn’t really care anymore. I have been to Egypt may be 4 times and always just used visa-on-arrival.

Without the doubt the package tours bring greater number of tourists, but individual ones are likely to spend more. Let’s see how long it takes for the Egypt to reverse this change.