People trying to fly with Lufthansa this past week have had quite rocky time due to “Non-stop strikes”.

The pilot union has been striking since Wednesday alternating with short/medium and long-haul pilot strike. Today the long-haul pilots are on strike.

You can access DW’s article about the strikes here of which below is an excerpt and Lufthansa announcement page for travel updates here:

Lufthansa canceled almost half of its long-haul flights on Saturday as a pilot’s strike entered in fourth day. The work stoppage struck 74 of 160 planned flights from departure lists, Germany’s largest airline said. Unlike the previous days of the strike, however, short and medium-haul flights would not be disrupted, nor the flights of low-cost subsidiary Germanwings.

The strike has affected 20,000 passengers after 700 flights were canceled on Friday and a further 90 were scrapped due to a separate air traffic controllers strike in Italy.

The Lufthansa employees started the strike on Wednesday over a protracted row involving early retirement benefits for about 5,400 pilots. Previously, they were entitled to early retirement at age 55 in consideration of the health risks of their job, and would then receive 60 percent of their regular income until the legal retirement age of 65.

Lufthansa’s decision to cancel these benefits has lead to 12 waves of strikes over the past year, costing the company over 200 million euros ($214 million) and affecting around 1 million passengers.

Lufthansa sent the following email to its frequent fliers on Friday: 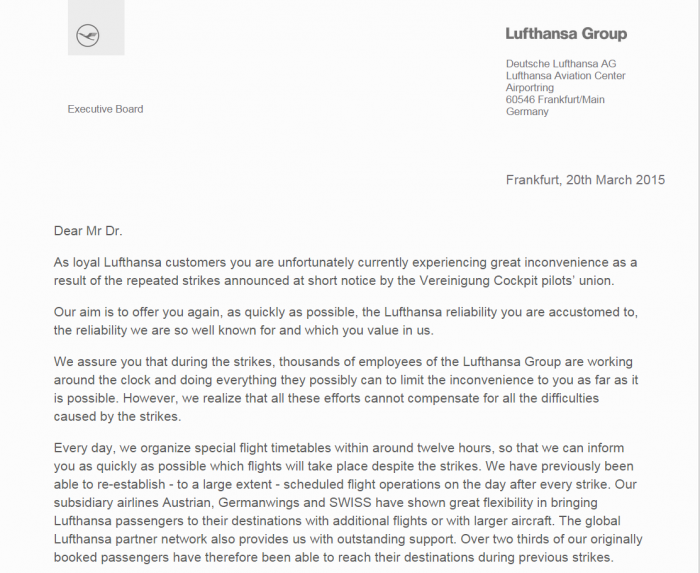 This strike action is becoming really ridiculous. They have been striking now for four days in a row.

It would probably make sense at this point to book away from Lufthansa if getting to the destination on time is your priority.

Hilton Honors has brought back the targeted offer for 7,500 bonus points for two stays (reader had received an email invitation). The offer is...

How Does W’s Momo Compare to Bliss?