Despite the current rift between the American Airlines, Delta and United and the Middle Eastern three (Emirates, Etihad, and Qatar), Emirates continues to expand its US network. 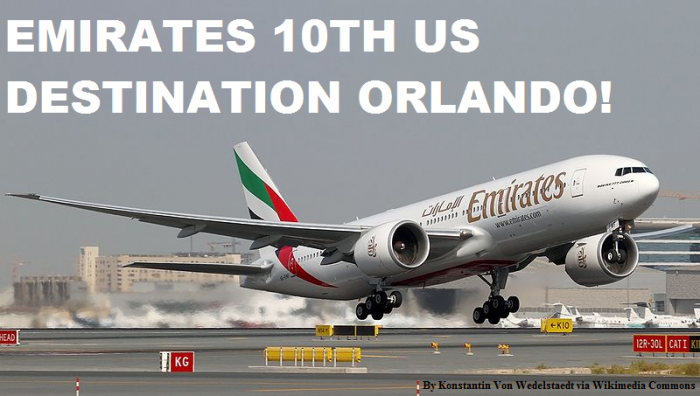 The airline announced yesterday that it would launch its 10th US destination on September 1, 2015, and that it would be Orlando. The airline will offer daily 15 hour flight in three class 777-200LR aircraft.

Here an excerpt from NY Times (access here) about the Orlando launch:

Emirates, one of the world’s largest international carriers, already has three daily flights between its home base of Dubai and New York, and operates another daily flight between New York and Milan. It also flies daily to Boston, Chicago, Dallas, Houston, Los Angeles, San Francisco, Seattle and Washington.

Emirates said passengers arriving in Orlando would be able to connect to other American cities, the Caribbean and South America, through a partnership with JetBlue Airways, which has a regional hub. JetBlue serves 24 cities from Orlando, including San Juan in Puerto Rico; Bogota, Colombia; and Nassau, the Bahamas.

Attempts to freeze flights from the Gulf carriers have divided the airline industry, with many seeing it as an attempt to rollback the open skies agreement that the United States has championed over the past three decades.

The flight will not only serve Orlando but also JetBlue destinations to the Caribbean and northern South America.

It is quite interesting that the Emirates decided to announce the launch of this new route less than week after the CEO was in Washington trying to combat the alleged subsidies that the Middle Eastern airlines are said to receive from their respective governments.