Mechanicals, when there are issues with the aircraft operating a flight that result in cancellation, are unavoidable but how airlines handle these situations vary a lot. 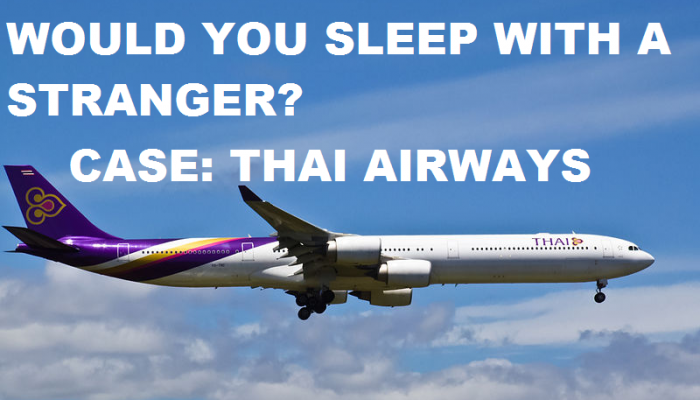 Reputable ones promptly rebook you to your final destination even using their non-alliance partners and/or provide accommodations and food vouchers. Then there are airlines that just leave you hanging dry. Seems that Thai Airways is somewhere between these two extremes.

Friend of mine pointed me to a post on Facebook about Thai Airways handling of cancellation out from Hong Kong.

The airline required passengers to share a hotel room with other passenger even when they were not relatives and didn’t know each other.

I just had my flight HK – Bkk with THAI AIRWAYS canceled last night. They offered a hotel room at a hotel nearby the airport in HK but for our surprise when we arrived to hotel (1am, after 7h at the airport waiting for accommodation) they said our rooms have to be shared..?

Despite our complaints they refused over and over again to offer individual rooms, and basically they put in the same room (and in some cases not even twin beds) people who don’t know each other at all… We couldn’t even get our luggage from the airport.

I was wondering if this kind of poor service is standard here or if it’s just THAI AIRWAYS who treats their customers like this.

I’m a solo business traveler, i think if they cancel my flight I should get my own room as I paid for one ticket (they do not place 2 customers in the same seat, do they?) I’m sorry but I’m not 20 years old anymore to share my room with a complete stranger (even though I was very lucky I shared my room with a nice guy from my country).

Thai Airways is just basically being cheap here and didn’t allocate rooms for each passenger.

Considering that the flight was cancelled roughly at 6PM local time in Hong Kong there would have been number of possible connection same night to Bangkok. They were just trying to minimize their loss and keep the revenue for themselves even when that would inconvenience passenger.

Quite often the airlines don’t rebook you on one of their competitors and/or non-alliance partners unprompted, but do that when requested.

I find it completely unacceptable that they were requiring non-relative passengers or even relatives to share rooms with each others. Hotels rooms can be expensive in Hong Kong, but that is Thai Airways cost of doing business when canceling a flight.

If I had been a situation like this, I would have just booked and paid for the hotel by myself and seek monetary compensation from the airline later. You may have to name and shame the airline on internet or even complain to the local authority, but I cannot see how they would not compensate at the end.

Thai Airways Will Operate More “Special Flights” TO Europe & Within Asia Until December 30, 2020