Let me start saying that I really like Brazil and have been there numerous times (15 to 20). I was mugged once (10 years ago) during Carnival in Salvador da Bahia (didn’t occur again this year) and have had a couple of other unsuccessful attempts. 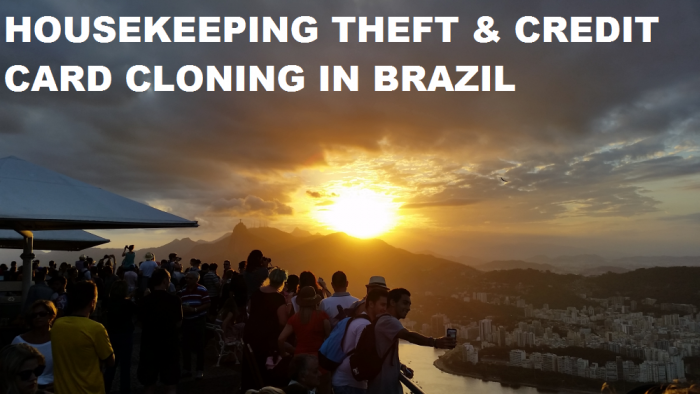 In the past 6 weeks, I have had $800 stolen by housekeeping (three separate instances) and two credit cards cloned while in Brazil. A friend of mine got his cell phone stolen at 7AM the other Friday while walking in Sao Paulo.

I keep leftover currencies from 20+ countries inside an expired password on a sidepocket of my Tumi computer bag and have done it for years. US dollars and Euros always come handy when paying for various VOA’s (Visa-on-arrival).

A US friend of mine needed some reais when on his way to the airport in Salvador da Bahia after the carnival and I exchanged $100 worth. This was at the Sheraton hotel in the city.

Ten days later when at the Renaissance in Sao Paulo, I realized that all the four mentioned currencies had disappeared from the bag. I did mention it to someone at the hotel. But as I wasn’t sure where it actually happened, didn’t push it.

2. Housekeeping at the Renaissance Sao Paulo helps him/herself for $100

As I was on my way to Buenos Aires, I had withdrawn some dollars from my account while in Montevideo (you can get $100 bills from the ATM).

I decided that I would count the notes every time before I leave the hotel and count them again when back.

Last Saturday, when I was out and about in Sao Paulo during the day, someone from the housekeeping had taken a $100 bill from the 15 I had in my bag. I was 100% sure about this as I had counted them before leaving.

I had the security come and read the lock to find out who had accesses the suite during the time. I spoke with someone from the hotel on Wednesday, after they had concluded the investigation, and only one person from the housekeeping had accessed it who had been with the hotel 15 or so years (long time employee).

I wasn’t expecting the employee to confess what had happened, but probably this is a deterrent for something similar happening in the future. If this person is the only one who accessed the suite, there is no other option than him/her taking the money. May be he/she thought that I wouldn’t note one note gone missing?

3. Housekeeping at the Sofitel Rio de Janeiro helps him/herself for $400

Well. I probably should have used to safe by now considering the two previous instances but I didn’t.

Went out and about in Rio from Monday afternoon to early evening. I was going to make couple of online payments and needed a security device from my bag. I realized at 11PM that someone had taken further $400. Again, I had counted the notes before leaving.

Called the manager and had the security to come read the lock.

Later, I found out that there had been four people accessing the room while I was gone for 6 hours. Housekeeping, housekeeping supervisor, someone had brought the Platinum amenity and then the turndown service. Some of them had used general master keys, so it took while for the hotel to find out exactly who had had access.

This time, however, I went to the tourist police station (next to the Shopping Leblon) and filed the report. The police told that they will get the tape, key card data and will interview the employees that accessed the room. I was surprised that they would even do something, as this was only a case of petty theft.

Then to the cloned credit cards. My DKB issued credit card suddenly stopped working, although I was well within the credit limit.

Called the number a couple of days later only to find out that someone had tried to use it at a Pilot (gas station chain) in Gretna (city in Louisiana in the other side of the Mississippi river from New Orleans).

I also went through the transaction on my last bill and found that someone had made three purchases for roughly 500 euros at an Extra store in Sao Paulo too.

When I was checking in to the Park Tower last night, they couldn’t authorize my MasterCard.

Sent an email to the contact at the bank that issued it who informed me that there had been some “unusual activity” and was given a number to call.

Turns out that someone had tried to charge 4,000 euros at a fashion store in Sao Paulo (6 transactions with lowering amounts) and one 5,000 euro transaction with Lufthansa. These had been all declined.

Can it be a coincidence that this was card issued in Germany and someone then tried to use it to purchase Lufthansa ticket? Whoever cloned the card probably wrote down the name of the issuer as well.

When did South America and especially Brazil become such a heaven for fraud? All these instances happened over 6 week period.

Of course, I am not liable for any unauthorized purchases made using the cards, but it will take several weeks before I will get the replacement ones. Just a huge inconvenience. A good reminder that you should always carry number of cards with you (I do).

There is no way that I would always lock all my “valuables” when leaving the hotel room. This would mean entering and closing the safe more than thousand times a year.

Of course then last night coming back to the hotel, the taxi driver switched notes at the end of the trip claiming that I had given him 2 peso note instead of 10 peso one. The problem was that I only had 100’s, 20’s and 10’s in my wallet. Didn’t want to fight over this (roughly a buck).

Let’s see what else gets stolen or cloned before I leave for Middle East and Europe on Thursday.