New York Times: “When a Plane Seat Next to a Woman Is Against Orthodox Faith”

The issue of ultra-Orthodox Jews refusing to sit next to a female on a flights to/from Israel has been on the news several times in the past year and now even New York Times has an article about it. 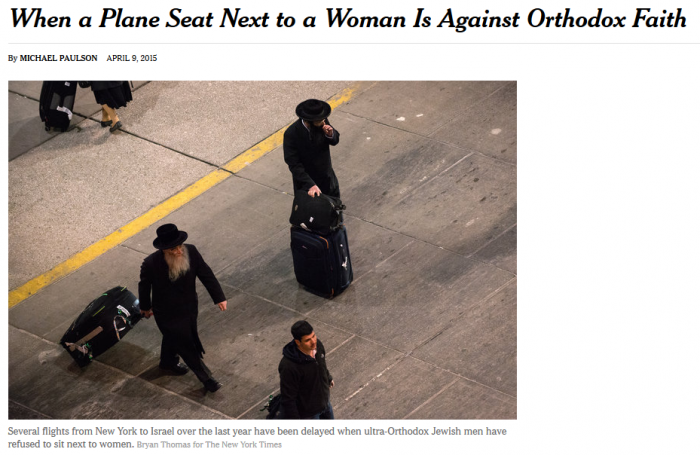 Apparently, their fate prevents males from sitting next to a female that is not their wife because they might inadvertently touch each other that is a big no no.

You can access the New York Times piece here of which below is an excerpt:

A growing number of airline passengers, particularly on trips between the United States and Israel, are now sharing stories of conflicts between ultra-Orthodox Jewish men trying to follow their faith and women just hoping to sit down. Several flights from New York to Israel over the last year have been delayed or disrupted over the issue, and with social media spreading outrage and debate, the disputes have spawned a protest initiative, an online petition and a spoof safety video from a Jewish magazine suggesting a full-body safety vest (“Yes, it’s kosher!”) to protect ultra-Orthodox men from women seated next to them on airplanes.

Airlines, and flight attendants, are often caught in the middle. Morgan Durrant, a Delta Air Lines spokesman, acknowledged the phenomenon, saying: “This is a dynamic of some customers who utilize our service. We’re aware of it, and we do what we can to get ahead of it prior to boarding.”

Other airlines had little to say about the situation, other than to agree that a variety of passengers make a variety of requests when traveling, and that carriers try to accommodate them.

It is not an entirely new issue; some ultra-Orthodox travelers have tried to avoid mixed-sex seating for years. But now the ultra-Orthodox Jewish population is growing rapidly because of high birthrates. Ultra-Orthodox men and their families now make up a larger share of airline travelers to Israel and other locations, giving them more economic clout with airlines,  and they are making their views more widely known in response to what they see as the sexualization of society.

If some these ultra-Orthodox Jews feel so strongly about the issue, may be they should start traveling on private planes or book 3 seats for each to ensure that there are no females sitting on the either side.

I don’t care what they do in private, but delaying flights and inconveniencing other passengers due to their religious beliefs is just nuts