If you don’t want to know what is sometimes happening with the checked in bags and at the TSA security check points with your carry-ons, you shouldn’t read/watch this CNN piece. 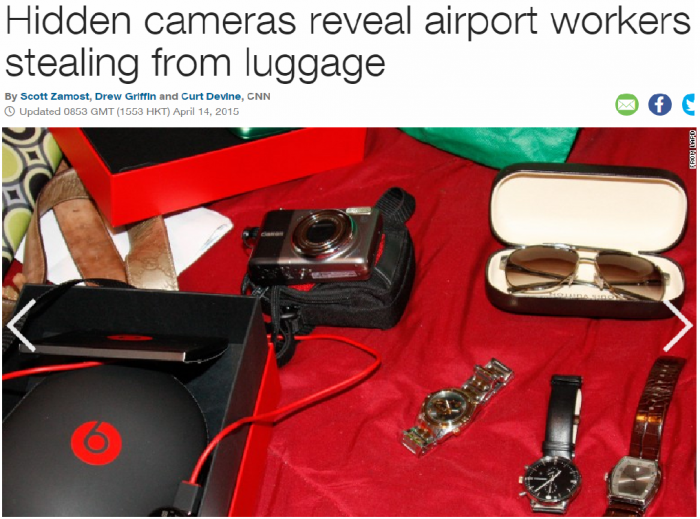 The theft from your checked in luggage is not only a problem in the 3rd world countries but apparently in the United States as well. The theft became so bad that the Israeli flag carrier even installed security cameras to cargo hold to find out what was going on there.

You can access the entire CNN article here of which below is an excerpt:

The problem has been so serious at JFK that in 2013, El Al Airlines set up a hidden camera in a baggage hold. The camera showed baggage handlers stealing items on flights bound for Israel, including a $5,000 Seiko watch, iPhones, an iPad, cameras, gold rings and cash. Six of those arrested pleaded guilty to possession of stolen property or petty larceny and the seventh suspect’s case was sealed, according to the Queens District Attorney’s Office.

The high-profile case, though, didn’t stop the thefts. Two more baggage handlers at JFK were arrested in 2014 after authorities said they stole two designer handbags from a suitcase, and then tried to sell them on eBay.

Then, in December, seven more JFK baggage handlers were charged with stealing valuables from checked luggage. The items were stolen from suitcases of passengers traveling to or from Hawaii, Japan, Johannesburg, London, Bangkok, Dubai, Milan and various U.S. cities.

In Miami, which aggressively goes after luggage thieves, police have arrested 31 baggage handlers and ramp workers since 2012, including six so far this year.

Remember that if something is missing form your bags you should always file a PIR (Property Irregularity Report) and push the airline to cover the stolen items. You may have to file a DOT complaint, but eventually the airlines tend to cover these (without follow up no).