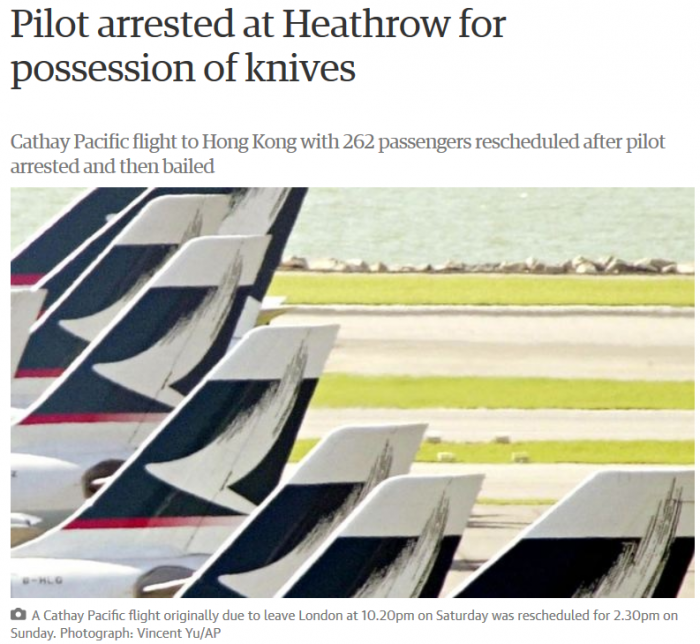 The pilot was bailed out, but the Cathay Pacific flight CX254 from London to Hong Kong was canceled as the airline was not able to come up with another crew or spare crew member to operate the flight.

You can read more about this incident on the Guardian’s website here of which below is an excerpt:

A pilot of a plane due to travel from London to Hong Kong has been arrested at Heathrow Airport after being found “in possession of some knives”.

A Cathay Pacific flight that was due to travel from London to Hong Kong with 262 passengers on board at 10.20pm on Saturday was delayed following a “crew-related incident” a spokesperson for the airline said.

“He was taken into custody at a local police station where he was later bailed to return in mid-May pending further inquiries. The CID at Heathrow airport is investigating.”

A pilot certainly doesn’t need knives to take down an airplane if he/she so wishes. Closing the cockpit door is enough, as we unfortunately found out in the Germanwings tragedy. It does, however, make you wonder what was going on in this pilot’s mind that made him/her believe they were exempt from the rules and/or somehow needed said knives.

When I first saw the headline and the arrest, I thought that it was yet another Captain that had too many drinks the night before and still had some alcohol in the system.