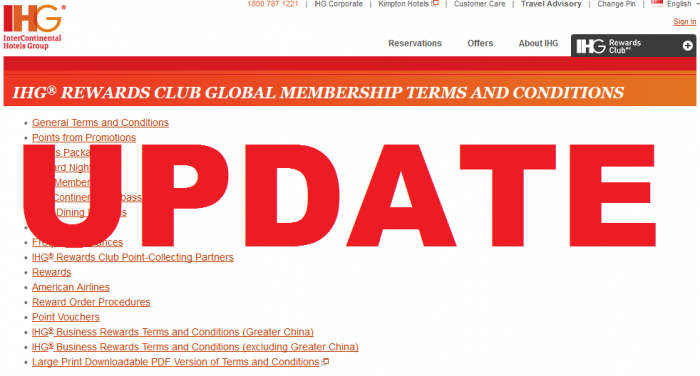 There are quite a few changes this time from removal of the non-expiry of points to earning points at some affiliated hotels (slashed by 50%).

IHG has now clarified that Kimpton Hotels are not part of the program but that the Hualuxe and Even brands are.

Cancellation & modification of the program

IHG Rewards Club has now removed the 90 and 180 days prior notification that previously were in the terms and conditions in a case that they would decide to terminate it altogether.

Previously, IHG Rewards Club has promised to notify its members of material changes to its program, but this has now withdrawn.

You previously earned 5 points per USD charged at these two properties that is now slashed by 50% to just 2.5 points.

IHG Rewards Club has now added the blurb about the points expiry to its program terms and conditions.

IHG Rewards Club has now clarified that the points expire when you die and that you can only transfer them by paying the fee.

IHG Rewards Club has added an arbitration clause that is non-enforceable. You can still take action against the company at your court of choice.

If you have a dispute what was agreed over the phone, just ask them to pull up the call from their archive.

SCH stands for the Six Continents Hotels. Not sure who came up with this “Frequency Alliance” wording. Quite confusing.

The IHG Rewards Club terms and conditions have certainly become so long and convoluted that one needs to read through them several times. I am sure that many are eagerly waiting when the Kimpton Hotels are part of the program. It is just weird that the number of points earned at Dubai and Ho Chi Minh (Saigon) properties were further slashed by another 50%.