Four Seasons Around The World private jet experience has received a lot of publicity in the past few days because of the piece that Bloomberg run about it. 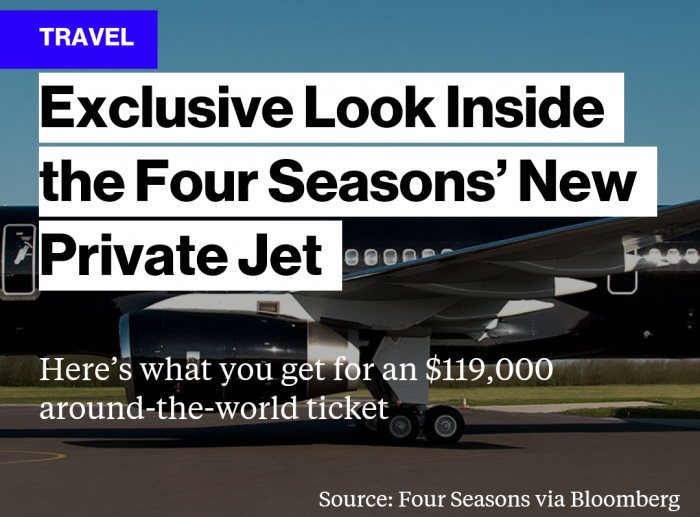 Four Seasons has Boeing 757 plane on its own livery inside and outside that jets guests around the world on various itineraries. These trips don’t come cheap. The price per person for 2016 trip is $132K when two are sharing.

You can access the Bloomberg piece here of which below is an excerpt and Four Seasons page for this product here:

Four Seasons has been offering private jet experiences with TCS since 2012, but it’s the first private jet fully branded to the resort company, giving them much more control over service and logistics than they had chartering other people’s planes.

The idea is to apply the famous service standards of their hotels at 35,000 feet.

There are, at minimum, 21 hotel-trained crew and staff on board each Four Seasons flight, including three pilots, two engineers, a “journey manager” (travel coordinator), a concierge, and an executive chef. A physician and a photographer also come along, when adventurous itineraries—such as diving the Maldives’ coral reefs or game watching in the Serengeti—require it.

Here’s sample around the world itinerary for 2016:

This product certainly doesn’t come cheap, but there are plenty of people with lots of cash. I can, however, see that it could fit to someone who is cash rich but time poor.

I am not that convinced that you would actually see anything local when you are being bussed (on private plane) from one Four Seasons property to another.

If only Four Seasons would have points based loyalty program. Imagine the number of points you would earn!