Despite the cry from American Airlines, Delta and United, Qatar Airways continues to expand its network in the United States. 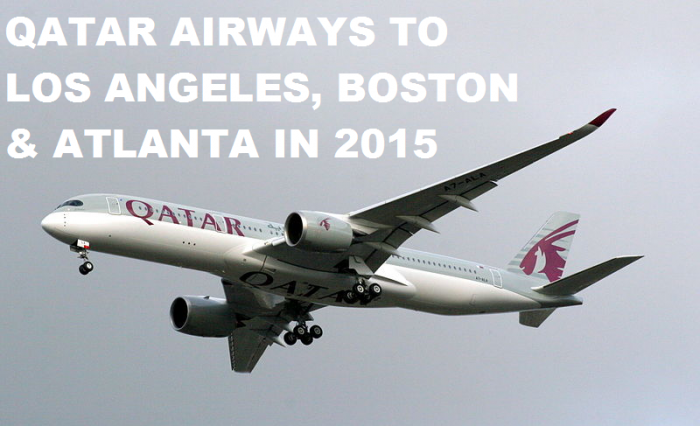 The airline made an announcement on Monday that it will start flying to Los Angeles on January 1st, Boston on March 16th and Atlanta on July 1st (rare to make an announcement more than a year in advance the route launch).

Below is Qatar Airways press release about its US expansion:

DOHA, Qatar – Qatar Airways announces the next phase of its USA route development with the introduction of three new passenger routes to Los Angeles, Boston and Atlanta. With these new destinations, Qatar Airways will offer daily nonstop services to all 10 of the largest metropolitan areas of the United States.

From 16th March, 2016, the airline will launch daily flights to Boston, the capital and largest city of Massachusetts, and will operate its latest flagship A350 XWB in a two-class configuration with 36 Business Class seats in a 1-2-1 configuration, featuring an 80” fully flat bed and 17” HD in-flight entertainment screen.

Atlanta, Georgia, the business centre of the southeast region of the United States, will be Qatar Airways’ third new route to the US and will commence with daily flights starting on 1st July 2016. The route will be operated with the airline’s flagship Boeing 777 aircraft.

Increasing passenger demand to America’s largest city and financial centre, New York, has prompted Qatar Airways to add a second daily service to the city from 1st March 2016. Qatar Airways has served the city daily since the initial route launch in 2007. The second daily service to New York’s JFK will be operated by the Airbus A350 XWB aircraft providing passengers an opportunity to experience both the Boeing B777 and the A350 aircraft types on the route.

Qatar Airways Group Chief Executive, His Excellency Mr. Akbar Al Baker said: “As Qatar Airways continues its global expansion, we are delighted to be offering even more gateways in the United States, connecting passengers from destinations across the Middle East, the Indian subcontinent, Africa and Southeast Asia.

“We look forward to offering a great travel experience to our US passengers on the World’s Best Business Class across our network of more than 140 destinations, with a convenient one-stop transfer at the new state-of-the-art Hamad International Airport in Doha.”

Qatar Airways’ on-board experience and service is renowned and provides an unparalleled commitment to service quality, as exemplified by being ranked twice in a row as the best in Business Class, and also by being named World’s Best Airline in 2011 and 2012 at the Skytrax World Airline Awards.

The airline has seen rapid growth in just 18 years of operation to the point where today it is flying a modern fleet of 156 aircraft to 146 key business and leisure destinations. Among the 146 destinations currently served are Dubai, Abu Dhabi, Mumbai, New Delhi, Singapore, Hong Kong, Bangkok, Jakarta and the Maldives – all with excellent connections from the US cities.

The Middle Eastern airlines of Emirates, Etihad and Qatar Airways continue their relentless expansion in the United States.

Wonder if the Atlanta was chosen due to the Delta CEO’s being the most vocal against the Gulf carriers and the spat that the CEO’s of Delta and Qatar Airways had recently? Now, Mr. Anderson (CEO of Delta) can take proper airline when flying to the Gulf.

Airfare of the Day [QSuites] QATAR AIRWAYS Boston to Bali from $2,756