The immigration to Europe has been on the news late due to the terrible accidents in the Mediterranean where people board shady boats in North Africa hoping to make it to Italy. 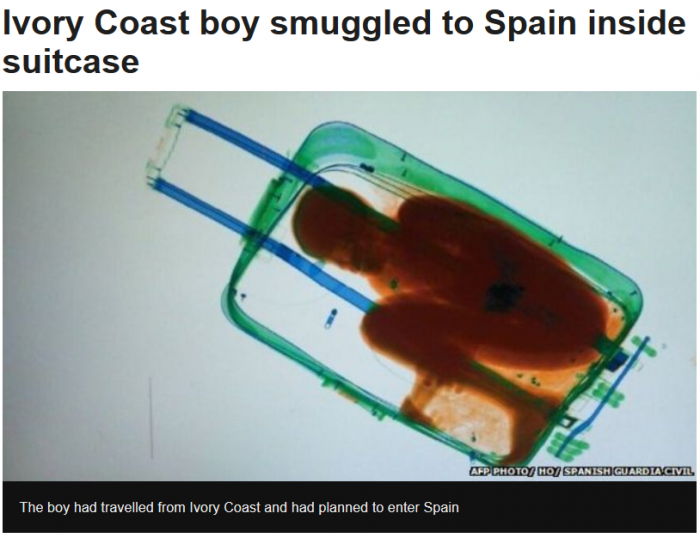 This time, however, a woman tried to smuggle 8 year old boy from Ivory Coast to the Spanish enclave of Ceuta in Northern tip of Africa. Spanish also controls similar small strip of land called Melilla further to the East.

You can access BBC’s article about this here of which below is an excerpt:

An eight-year-old boy has been smuggled into Spain from Morocco inside a suitcase, Spanish police say.

The boy, Abou, was found inside the case being carried by a 19-year-old woman into Ceuta, a Spanish enclave next to Morocco, on Thursday.

When police opened the case, they found the boy in a “terrible state”, a spokesman for the Guardia Civil told AFP.

The boy, from Ivory Coast, is now in the care of authorities in Ceuta.

The Spanish newspaper El Pais reported (in Spanish) that the 19-year-old is not related to the boy, and was paid by his father to carry the suitcase.

The boy’s father lives in the Canary Islands and had hoped to be reunited with his son, El Pais said.

The Spanish news agency Efe said the boy’s father, also named Abou, had travelled back to Ivory Coast to pick him up, having moved to Gran Canaria in 2013.

The father then reportedly paid the Moroccan courier to carry the suitcase. A police spokesman told Efe: “She seemed to hesitate, and it looked as though she didn’t want to come through the border.

His father must have had residence permit to Spain, as he had been living/working in the Canary Islands. Just surprising that he hadn’t been able to get a legal residence for his son too.