Couple of LoyaltyLobby readers from Canada have been sending me links to this piece by CBC News about Air Canada’s new carry-on luggage crack down. 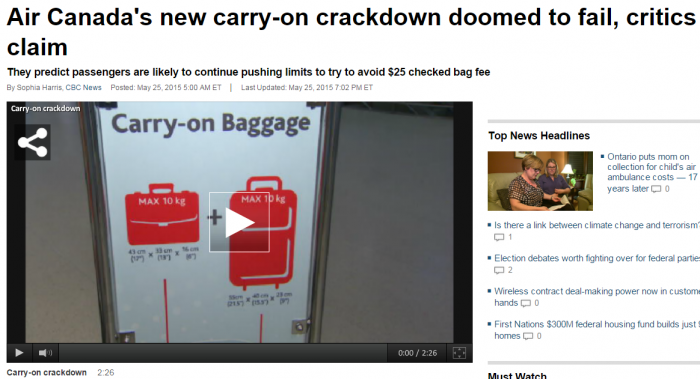 Apparently, the airline wants to boost its ancillary income coming from the checked bags ($25 per piece) and has now started to weight carry-on at the time of checking in or at the gate.

You can access the CBC News piece here of which below is an excerpt:

Air Canada is once again targeting passengers who try to sneak on excess carry-on luggage. But critics claim the stepped up crackdown ultimately won’t solve the upsurge in on-board bags.

That’s because, they say, passengers will continue to push the limits to avoid that new $25 checked bag fee.

“Everybody just hates to be nickeled and dimed,” airline analyst Barry Prentice says.

Starting at Toronto’s Pearson International Airport today and then expanding across the country next month, Air Canada agents at both check-in and security will be tagging carry-on that meets size limits. Bags that don’t make the cut must be checked.

Passengers not caught until they hit security will be sent back with priority status to check their offending bags.

This is Air Canada’s latest attempt to police carry-on, an extension of a campaign that began last fall shortly before it introduced a $25 first checked bag fee for domestic economy flights. As expected, to avoid paying the fee, some passengers started hauling more on board.

Is Air Canada really going to have its own employees measuring and weighting carry-ons at the security check point or are they going to do this at the gate? I doubt that the airport or Canadian government is going to pay for Air Canada’s “enforcement” activities.

I am all for airline requiring oversize carry on baggage to be checked, but the weight limit greatly varies between the airlines. Some only allow your carry on to weight 6 to 8 kilos where some others really don’t care the weight at all but the physical size.

My black 22 (that fits the overhead compartments wheels on) weights 14 to 18 kilos depending what I am carrying. Most airlines allow it as a carry on, but occasionally I must check it in.

Air Canada has launched a new offer to get its loyalty program members to buy gift cards by awarding extra... 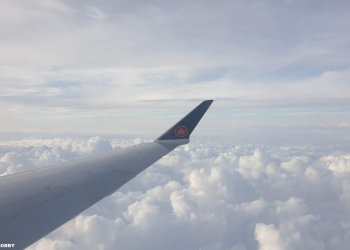 Air Canada has launched bonus miles offer on cross-border flights between the United States and Canada. Aeroplan members can earn...