The Irish Government yesterday accepted the all cash offer from International Airlines Group (the parent of British Airways, Iberia and Vueling) for its 25% share of the airline. 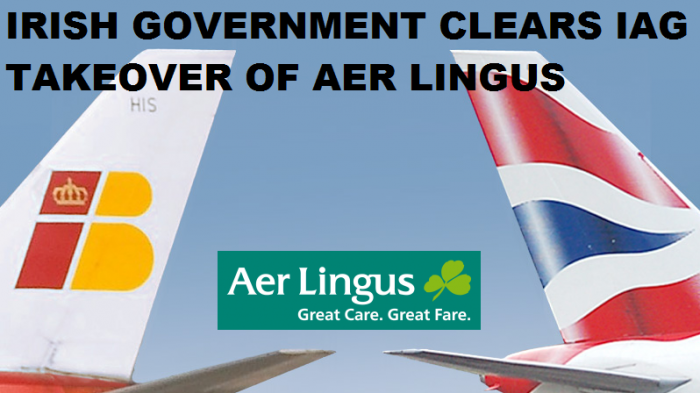 The board of Aer Lingus is recommending that the shareholders accept the deal. Ryanair currently owns 29.8% of the airline and Etihad Airways is a shareholder as well.

You can read more about this development Financial Times website here of which below is an excerpt:

The main attraction for IAG and Mr Walsh is the prospect that Aer Lingus can expand its transatlantic services from Dublin airport, which, unlike Heathrow, has spare runway capacity. But the deal was always dependent on getting agreement on maintaining Aer Lingus’s Heathrow slots for flights to and from Ireland.

To win the government’s backing, IAG has given seven-year guarantees on valuable routes into London’s Heathrow from Dublin, Cork and Shannon on condition that airport charges would not increase beyond certain levels.

Willie Walsh, IAG’s chief executive, initially said he would guarantee Aer Lingus’s 23 lucrative take-off and landing slots at Heathrow only for five years. This has been one of the biggest hurdles to government approval. Belfast routes are still only guaranteed for five years.

Aer Lingus was part of the Oneworld Alliance before it decided to go the LCC route, although it has beefed up its offerings as of late to become more of a full service airline. .

This certainly means less competition on the transatlantic route and gives British Airways more Heathrow slots that it can use to develop other long-haul routes, although it has pledged to keep serving certain Irish routes from Heathrow for minimum of 7 years.