WSJ had a story on its The Middle Seat column yesterday about the recent phenomenon with the airfares. The price of business (and sometimes even first) class seats have come significantly down. 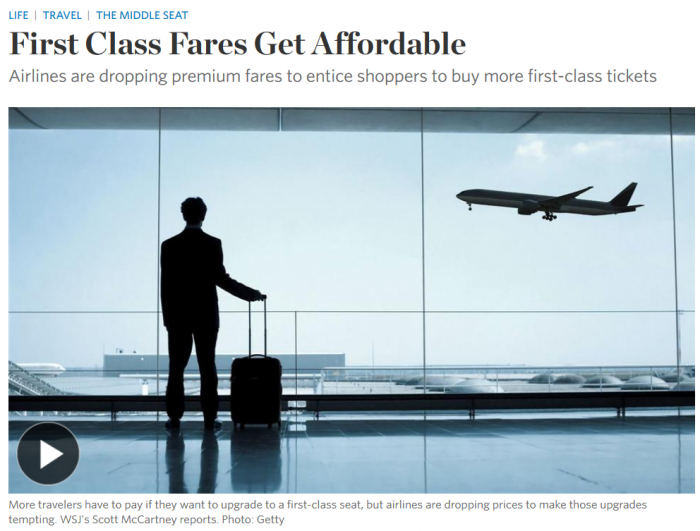 Especially the US airlines that used to give most of the (domestic) first class seats as upgrades to elite members have become better selling them at more reasonable price and/or monetizing the upgrades.

You can access the WSJ article here of which below is an excerpt:

Airlines are dropping fares to entice shoppers to buy more first-class tickets. They also are tempting frequent fliers with round-trip upgrades for as little as $100 or $200 on domestic trips.

The catch: Frequent fliers used to get many more upgrades to first class free. For airlines, the shift in strategy is squeezing more revenue out of their best seats.

“Airlines are recognizing that if they are going to have these seats, they should be using them for something other than upgrading frequent fliers,” said Bob Harrell, a consultant who tracks fares at his firm Harrell Associates LLC.

A sampling of heavily traveled routes for American, Delta and United airlines found that the number of discounted first-class fares airlines loaded into reservation systems in the week of May 4 was up compared with the same week last year, Mr. Harrell said. He also found the lowest price for first-class seats in each market studied was down.

Airlines Reporting Corp., a consortium that processes tickets sold by travel agencies, said an analysis of 200 million tickets sold from the beginning of 2012 to the end of April this year came to a similar conclusion. It found the gap between the price of coach and the price of first class steadily narrowed during the period studied, while the number of premium tickets sold steadily grew.

Although the WSJ article mainly addresses the situation with the domestic US flights and first class seats, the discounted business class (and sometimes even first class) international flights have often come down in price.

This year alone, I have already purchased four Europe to Asia business class tickets that are far better value for me than awards that wouldn’t have allowed my preferred routing, stopovers and sometimes destinations. It doesn’t hurt that these earn elite miles/tier points and award miles too.