Starwood Preferred Guest (SPG) and Delta Air Lines launched Crossover Rewards back in 2013 (read more here and here) for bonus points and miles + other benefits for each others elites. 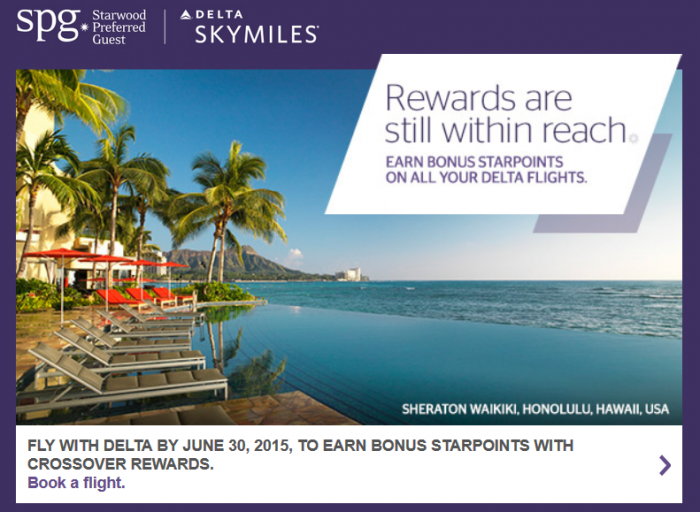 Now, SPG members that were targeted for this latest promo can earn up to 5,000 bonus Starpoints for taking thee Delta flights by June 30, 2015.

There is lo landing page for this offer but you can access SPG’s web page for Delta partnership here. 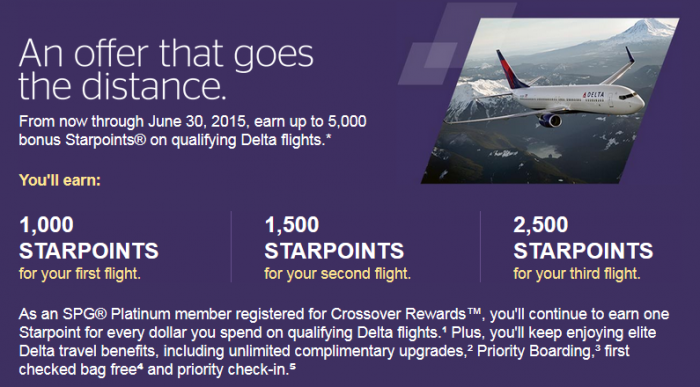 Note that the terms and conditions state that tickets booked with expedia.com, hotwire.com, priceline.com, orbitz.com, cheaptickets.com, travelocity.com and each of their subsidiaries are not eligible for the bonus miles.

The terms also refer that the offer is only valid for ROUND-TRIP flights.

This is a nice bonus for those SPG members that were targeted for it and fly with Delta. This would have been easy 5,000 bonus Starpoints for many.

Thanks for the reader who forwarded me this offer. Remember to send me offers that you receive from hotels and airlines.

Qualifying Delta Flight. A “Qualifying Delta Flight” is a flight that is marketed and ticketed by Delta (e.g., has a DL flight number) and that earns miles in the Delta SkyMiles program under the Delta SkyMiles Rules & Conditions, except for flights that are booked through online travel agencies including, without limitation, expedia.com, hotwire.com, priceline.com, orbitz.com, cheaptickets.com, travelocity.com and each of their subsidiaries.

Bonus Starpoints will be credited to the member’s account within 4–6 weeks of completion of the Qualifying Delta Flight.

Starwood and Delta will exchange member data to facilitate the promotion and processing of points in accordance with the Crossover Rewards Program Terms and Conditions.