When I was watching BBC News this morning, there was an interesting segment on some tourists in Malaysia that had climbed to the top of the Mount Kinabalu and taken some naked photos. 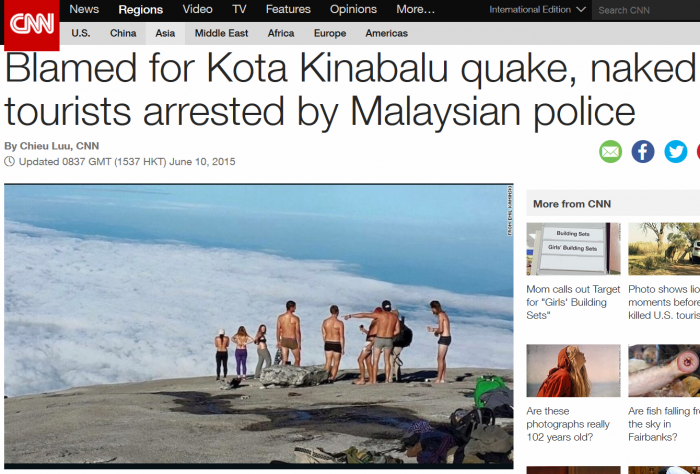 The act has angered locals that blame these tourists for the subsequent earthquake that killed close to 20 people. Malaysian police has arrested some of the climbers while still searching for the others.

You can read more about this incident on CNN piece here of which below is an excerpt:

Police in Malaysia have arrested four foreigners believed to have been part of a group of tourists who stripped naked at the summit of Mount Kinabalu, according to Bernama, Malaysia’s official news agency.

The arrested tourists were two Canadian brothers, a Dutch woman and a British woman aged between 20 and 33, said Jalauddin Abdul Rahman, police commissioner in the eastern Malaysian state of Sabah.

A local magistrate’s court said they would be held for four days while the “obscene act” that took place the mountain was investigated.

The suspects could face up to three months in jail or a fine if convicted.

The mountain was shaken by an earthquake Friday in which at least 16 people were killed.

The indigenous people of Sabah believe the tourists’ behavior on May 30, deemed disrespectful of local culture, angered the spirit of the mountain and was the reason for the earthquake, Bernama reported.

People should remember that Malaysia is predominantly a muslim country, although there are some religious minorities too.

It is difficult for me to believe that an earthquake could have been result of people taking photos naked on the mountain. This can be, however, very disrespectful for the locals that have religious believes attached to the place.