New York Times: “Airline Discipline Could Be Costly For Passengers”

The consolidation of the US airline industry over the past decade or so have left three network carriers of American, Delta & United and Southwest that control 80% of the US traffic plus a number of smaller players such as JetBlue and Virgin America. 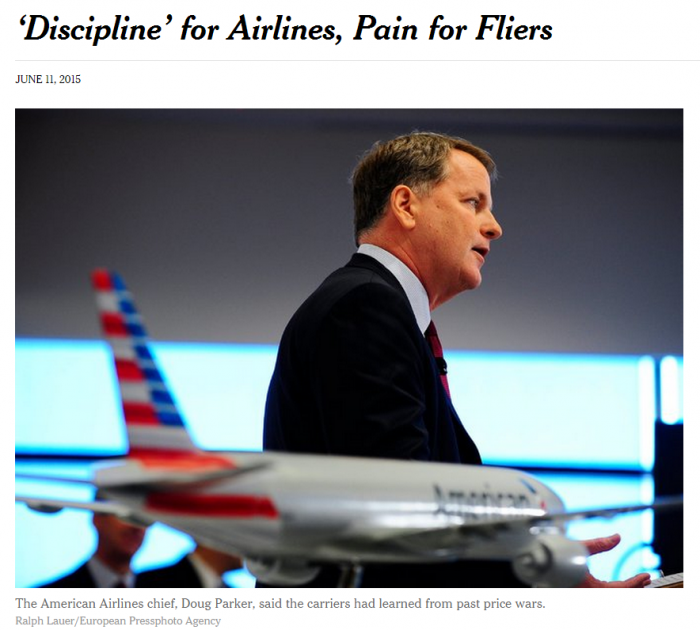 American Airlines swallowed US Airways that earlier merged with America West. Delta bought Northwest and United purchased Continental. Southwest Airlines purchased Atlanta based AirTran. This consolidation has lead to less competition between the airlines and ever increasing prices.

New York Times run an article about this yesterday that you can access here of which below is an excerpt:

At this week’s meeting in Miami of the International Air Transport Association, the annual meeting of the world’s top airline executives, the buzzword was “discipline.”

Here is Delta Air Lines’ president, Ed Bastian: Delta is “continuing with the discipline that the marketplace is expecting.”

Air Canada’s chief executive, Calin Rovinescu: “People were undisciplined in the past, but they will be more disciplined this time.”

And American Airlines’ chief, Doug Parker, said the airlines had learned their lessons from past price wars. “I think everybody in the industry understands that,” he told Reuters.

Got the message? “Discipline” is classic oligopoly-speak for limiting flights and seats, higher prices and fatter profit margins. This year, that discipline seems to be working: the I.A.T.A. projected this week that airline industry profits would more than double this year to nearly $30 billion, a record.

Now that the US airlines have created oligopoly for the domestic travel and have JVA’s for transatlantic/pacific travel where airlines within an airline co-ordinate pricing and availability and also share the revenues, they also would like to limit the open skies access of the Gulf airlines. Doesn’t make much sense from the consumer’s point of view, does it?

The airlines are “signaling” each other their capacity “discipline” and prices. This is not collusion but close to it.