Mechanicals are unavoidable when you fly and the older airframes that the airlines fly these days simply mean more of them. But how an airline handles diversion and recovery, distinguishes itself between a good and bad operation. 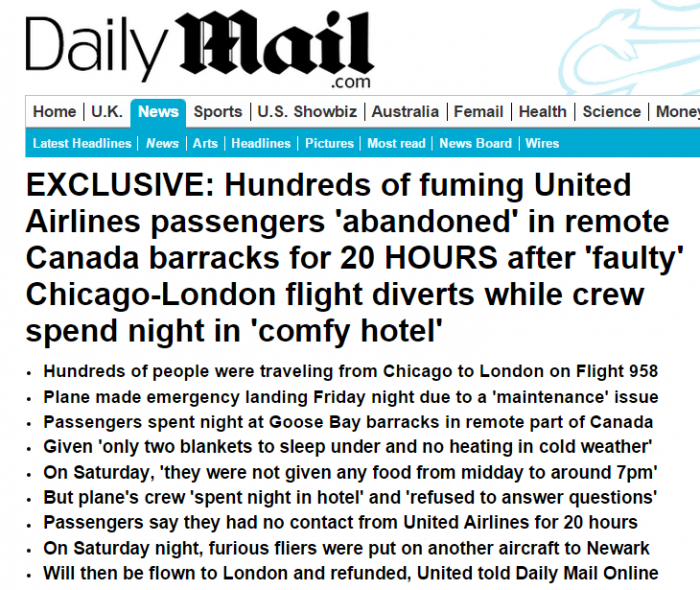 Based on the incident last Friday when a United flight from Chicago to London made a diversion to Goose Bay in Canada and put passengers in army barracks for an overnight, I would say that United is one terrible airline.

This incident has been covered on the media well over the weekend. You an find Daily Mail article about this incident here and the CNN one here.

Here’s an excerpt from the Daily Mail:

Hundreds of men, women and children have been abandoned at remote barracks in Canada for 20 hours after their United Airlines flight from Chicago to London had to make an emergency landing.

The passengers were apparently forced to sleep in uncomfortable beds with only two blankets and no heating at Goose Bay barracks on Friday night after landing due to a ‘fault’ with the aircraft.

They have reportedly been given only two meals, have had ‘no word at all’ from United Airlines – and two elderly passengers were even ‘dumped’ at the wrong part of the barracks and left overnight.

But while the passengers remain hungry, cold and confused, the crew spent the night at a hotel in Newfoundland and Labrador, passenger Simon Millward told DailyMail.com from the barracks.

And here’s from CNN:

“In the (barracks) that I was sent to, there weren’t any towels available,” Harper said on CNN Newsroom. “While there was a bed, there were no blankets…and there was no heating in the particular barracks building I was assigned to. So it was quite cold for quite a few hours while we waited for breakfast to be served.”

Quite cold indeed. In fact, the coldest day of the month, according to CNN meteorologist Taylor Ward. The overnight low dipped into the 30s — and passengers had no access to perhaps warmer clothes in their checked bags.

“The temperature was 39 degrees, so it was cold,” George Hudiczius told CNN affiliate WLS. “I didn’t carry coats and pants so I was in my shorts, and I have light jacket.”

But what the barracks may have lacked in basic necessities such as heat and blankets, it made up for with Internet connectivity.

You would imagine that an airline, especially a US carrier post-9/11 and the size of United would be better prepared for a flight diversions and have contingency plans in place?

They must have made a cost benefit analysis and come to a conclusion that it didn’t make financial sense to send another plane to take the passengers from Goose Bay to London rather than stranding them there for a day and then flying them to Newark before rebooking them on other flights.

From a recovery point of view, United doesn’t fly to Goose Bay and thus wouldn’t have personnel on hand to rebook and arrange hotel vouchers.

There are flights from Goose Bay (YYR) to Halifax and St. Johns that both provide connectivity to London on scheduled Air Canada flights, one of United’s Star Alliance partners.

Most of the passengers must have been either Americans or British that don’t need visas to enter Canada, but despite this I don’t think an airport size of YYR would have substantial Immigration and Customs facilities.

Even if the passenger would have got United to rebook them to London via Halifax to St. Johns, it would have meant to be without checked bag(s) probably a minimum for a week if not longer. Obviously not a problem for those that live in UK and were merely returning to their homes.

My advice for those that end up on a diverted flight is to call the airline and have them rebook you over the phone. If the accommodation provided by the airline is inadequate, book whatever acceptable is available and seek reimbursement later.

This saga reminds me of my friend’s United flight diversion to St. Johns a few years back during Christmas. Although United did provide proper accommodations there, the delay was equally significant (one day) and communication was very bad.

But I am sure that the passengers on this flight would rather have had the inconvenience of spending the night at the army barracks in Goose Bay than risking personal safety by flying on a flight with mechanical issues.