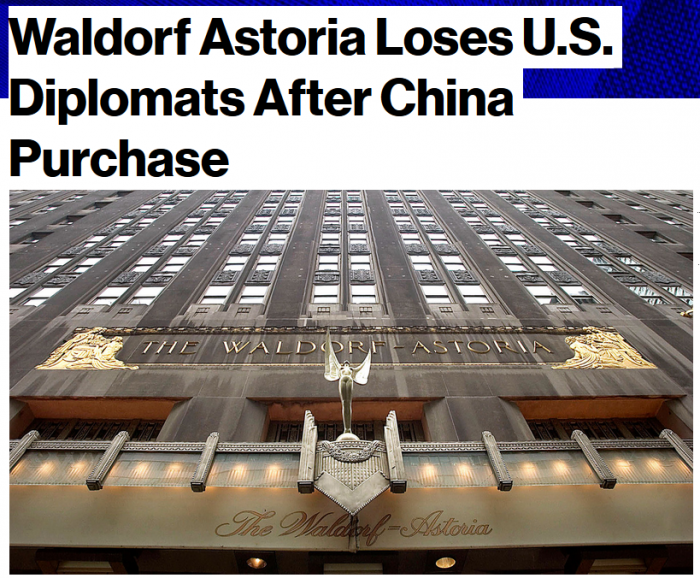 The U.S. State Department has decided to switch from this hotel to the nearby Palace New York.

You can read more about this change on Bloomberg New website here of which below is an excerpt:

The U.S. State Department, after decades using the Art Deco luxury hotel as home base for U.S. diplomats during the United Nations General Assembly, will shift this September to the nearby New York Palace Hotel, said a U.S. official, who confirmed the change first reported by the Associated Press.

The shift has been under consideration since Hilton Worldwide Holdings Inc. sold the midtown hotel in 2014 to Beijing-based Anbang Insurance Group Ltd. for $1.95 billion.

The decision hasn’t been formally announced and the official, who spoke on terms requiring anonymity, offered no comment on whether the move was due to concerns about possible Chinese spying.

“It is always a privilege to host representatives of the U.S. Department of State and we hope to have to occasion to welcome them back to the Waldorf Astoria New York when the opportunity presents itself,” according to a statement from the Waldorf Astoria.

In late 2014, when the potential spying issue first arose, a spokesman for Hilton Worldwide, which continues to manage the property, said it was “confident there are no national security issues as a result of this transaction.”

Ouch! The Chinese have probably bugged the hotel by now and the U.S. State Department doesn’t feel that they continue to stay there and thus decided to switch hotels.