Another week and yet another United flight diversion that leaves passengers stranded this time at the Belfast airport. 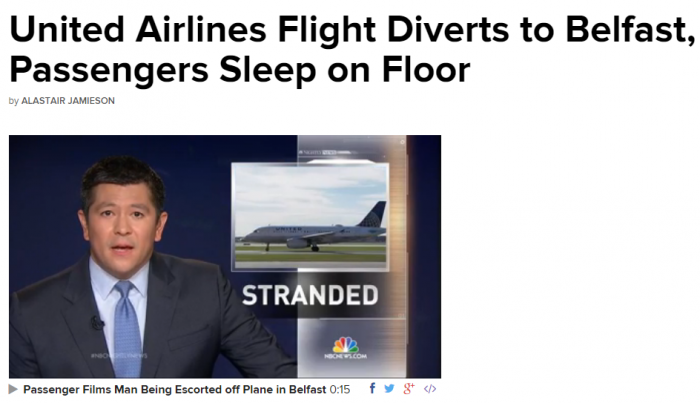 A United flight from Rome to Chicago diverted to Belfast to drop off an unruly passenger and in the process the cockpit crew exceeded the FAA permissible flight hours and the flight was canceled.

You can read more about this incident on NBC News here and on Daily Mail here.

Here’s an excerpt from NBC News:

Their ordeal began when Flight UA971 made an unscheduled landing in Belfast, Northern Ireland, where a passenger was arrested.

The Boeing 777 landed at 6.59 p.m. local time (1.59 p.m. ET) Saturday and was refueled but flight crew reached FAA working hour limits before the journey could resume.

With not enough local hotel rooms available, the 269 passengers were forced to spend the night in the terminal — the second time in a week that United customers have been left stranded because of a diversion.

A passenger from Chicago, Billy Saviano, said the flight was finally supposed to leave the airport at 1 p.m. local time (8 a.m. ET) but that got delayed to 4 p.m. (11 a.m. ET) Sunday — 21 hours after they landed in the U.K. and some 24 hours after they left Italy.

And here from Daily Mail:

But he was disappointed by what he claimed was a ‘lack of communication’ on the part of United Airlines once passengers were inside the terminal.

A United Airlines spokesman told MailOnline Travel: ‘United flight 971, from Rome to Chicago, diverted to Belfast yesterday because of a disruptive passenger.

‘Law enforcement met the aircraft and the passenger was removed. The crew then reached its maximum duty time, leading to the cancellation of the flight.

‘We understand the inconvenience this causes our customers and will refund their Rome to Chicago flight as well as offer the choice of a travel certificate or miles for our MileagePlus loyalty program.’

There are 78 hotels on Booking.com for Belfast and TripAdvisor lists 44 hotels, 50 bed & breakfast and inns, and 27 specialty lodgings for the city. Were they all really sold out on Friday night? It’s difficult to believe. The Irish capital of Dublin would have been roughly two hours by car with a far greater number of hotels. .

It is understandable that the cockpit crew couldn’t operate the flight due to exceeding the legal duty hours, but how United is again unable to take care of the passengers is incomprehensible.

The affected passengers should have booked themselves to local hotels and seek reimbursement from the airline later.

United Airlines with Points.com has decided to launch a miles subscription service that many other non-North America-based airlines already offer,...

United Airlines has launched a new Mystery Bonus Sale to buy MileagePlus miles at a 100% bonus until October 25,...

Radisson Rewards Americas and United Airlines have launched a conversion bonus for transfers made between October 1 – 31, 2021....