3 Months ago the ICAO notified the Thai authorities about their concerns and issued a deadline to implement improvements and comply with those standards of the Category 1 classification. This deadline has now expired and as a consequence the Red Flag has been put in place, making it impossible for Thai Carriers (especially charter carriers such as Thai Air Asia-X, Nok Air, Nok Scoot etc) to file new routes and expand their international network.

Reuters reported on the matter here:

On its website, the International Civil Aviation Authority (ICAO) listed Thailand with a red flag, which means it has been downgraded to Category 2 from Category 1.

This was because the Thai civil aviation authority’s safety standards were “below the standards set”, said a senior Thai Department of Civil Aviation official, who declined to be named, because of the sensitivity of the subject.

“The red flag was given today by the DCA, which means we have a problem with safety, in terms of aviation safety. It is below the standards set,” said the official.

The downgrade could create a ripple effect and prompt global aviation agencies to reevaluate the safety of Thai aviation facilities, the Economic Intelligence Center at Thailand’s Siam Commercial Bank said in a note this month.

This comes in the wake of news (see related Bangkok Post article) that a former Thai Police General got caught at Tokyo Narita Airport with a gun and ammunition in his carry on which he boarded with at Bangkok BKK International Airport, likely bypassing airport security using his social standing.

This is a huge blow to Thailand’s reputation and shall prove to be a huge inconvenience to the expanding air carriers registered in Thailand. Thai Air Asia is the only profitable subsidiary of Air Asia as it was exposed after financial audits of the Air Asia Group (see LoyaltyLobby’s related article) and this matter will hinder them in expansion.

As long as Thailand (and countries with similar culture when it comes to unusual privileges for persons of higher public standing) continues with white glove treatment and exceptions even in sensitive security matters I can’t see the standard improving anytime soon.

Thailand is currently under non-civilian rule after a Military Coup in 2014 and it is uncertain when the country will return to a democratically elected civilian government. In the meanwhile it is hard to say which priorities the current government has when it comes to matters of international ratings, even if it impacts elements of the local economy. 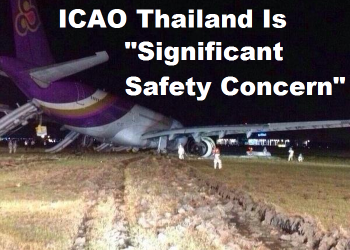