The ever so hated Dynamic Currency Conversion (DCC) when paying in a foreign currency makes a comeback to LoyaltyLobby this week. I encountered this by using one of the outlets at the Park Hyatt Beijing. 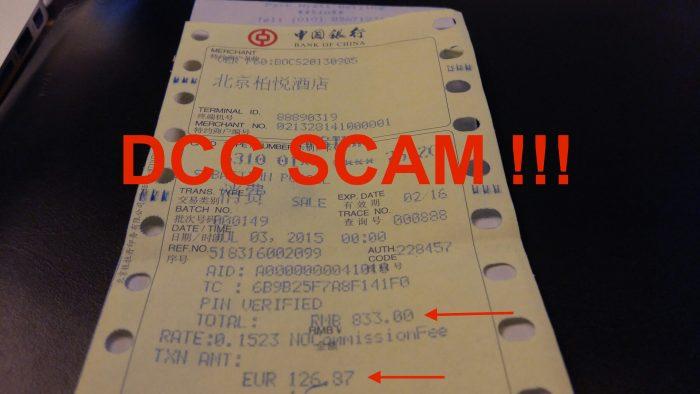 This method of ‘generating extra revenue by screwing your customers’ is not new and mostly the frequent traveler encounters this at the hotel front desk or sometimes car rentals. However you can also encounter this at regular stores and restaurants.

In this particular case however I was frequenting one of the F&B Outlets at the Park Hyatt Beijing where I purchased a bottle of liqour. I usually sign it to my room but used the CC for this tab – a big mistake! Now, I’m always on guard when I pay the final folio at the Park Hyatt Beijing because more than once have I noticed this and the transaction needed to be corrected retroactively. In one case the associate experimented that long with my credit card (5x cancellation/charge) until it got busted for fraud prevention and I couldn’t get it unlocked until 2 days later.

I got handed the payment machine at the bar which already showed Pin entry. I also remembered seeing the original amount of 833 CNY so I typed away, purchase confirmed and a good evening was had. The next day I looked at the receipt and it shows my card was charged in EUR and even goes so far as stating ‘I declare that I have been offered a choice of payment currencies and my choice is final.‘ (that part is cut off in the picture due to some other personal data in that same area). Now, at the time of purchase I was 100% sober and this ‘choice’ was never offered. In plain terms: This is simple fraud and grounds enough to dispute the charge with your credit card company.

I checked immediately on xe.com and the exchange rate that day would have equaled 120,70 EUR which means the merchant made a quick 6 EUR (5% of the total purchase) for no service or product provided. Some merchants call this a ‘convenience fee’ but I really fail to see the convenience especially since my bank adds another 1.25% Foreign Transaction Fee based on the Point of Sale and not on the currency charged.

Some cards such as American Express and Union Pay do not have these currency conversion options, however in the case of AMEX they use their own “proprietary” rate if you purchase in a currency other than USD that is highly to the disadvantage of the customer.

I will keep a closer eye on these overseas purchases while using the card from now on. Depending on how high the purchases are this can easily go into the regions of a nice dinner as far as the value goes. Travelers should be vigilant what they sign and use their PIN code for as far as payments are concerned. I failed to do this here so I partly blame myself for falling victim to this scam even though I should have known better.

As for this case, I like the outlet and the staff there so will not raise hell over the matter. In the future I will pay cash or just sign to the room as usual to avoid this issue.