Here are six reader questions from the past week (so many good questions coming in!) that I have decided to reply to publicly. You can always email me, leave a note or private message on Facebook, or Tweet me with your questions. 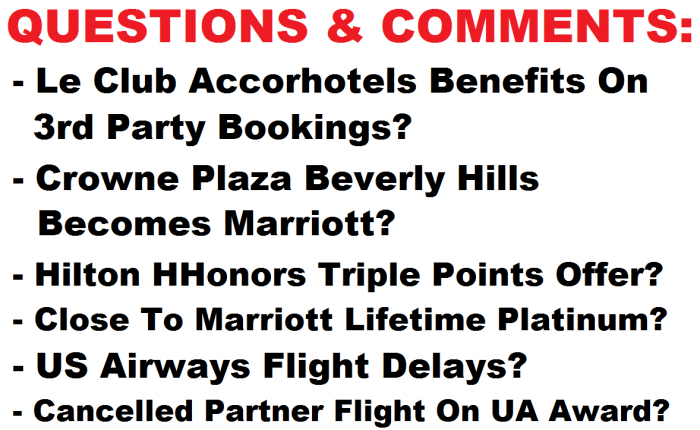 Just at a Novotel in cairns now which was booked through booking.com. The receptionist said that they won’t honor any status unless booked via Novotel. They just had the directive from accor last week. Have you heard anything about it?

I went through the program T&C’s last year when I had booked a travel industry rate for a Novotel hotel and they refused status related benefits. 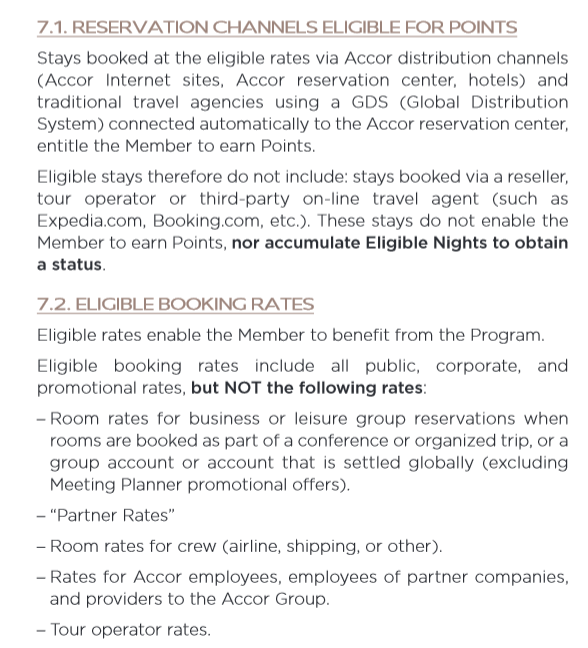 One goal of the hotel loyalty programs is to get as many members to book directly. These online travel agencies take anywhere from 10% to 25%. Booking.com’s cut is 15%.

I had a hotel reservation for the Crowne Plaza Beverly Hills which is not being turned into a Marriott effect June 30, 2015. I had a award IHG Points reservation there.

They are now claiming they will not honor this as they are a Marriott. IHG is unwilling to do anything about it, and they are unwilling to put me at the next closest hotel for the same charge.

There are very few hotels that these chains nowadays actually own by themselves. One of the keywords today is “asset light” strategy meaning that outside investors own the building and someone operates it for them under an agreement with one of the global brands.

I have stayed at the Crowne Plaza Beverly Hills last time maybe 5 years ago and it was a terrible hotel and not really in Beverly Hills at all.

IHG has traditionally been quite good with hotel reflags. What they usually do is to give you points for the difference between the hotel you have booked at and whatever is available close by that in this case would be the InterContinental Century city (that was first JW Marriott and then Park Hyatt before becoming an IC).

Many hotels do honor the award reservation when the flag changes, but apparently this one didn’t. Doesn’t really surprise me considering how badly it was run when I stayed there.

The reader was eventually able to get compensation point from IHG Rewards Club so that the stay could be moved to the InterContinental hotel. So, they made it right at the end but the reader had to contact IHG regarding this several times.

I am a Hilton diamond member.  The triple points promotion that your Loyalty Lobby message talked about last week has a few tweaks to it that I found out.  The promotion is for a two day weekend stay that starts on Thursday and concludes Sunday.  When I put in the ZZTPT1 code the triple points do not come up, but it also does not tell the promotion is invalid.  The Hilton Honors direct phone line operator said the program was good for all hotels.

This offer (per the T&C’s) is valid for stays in the Americas and actually doesn’t mention the weekend date requirement. The example that I used on that piece (access here) was for a Wednesday to Friday stay at a HGI in New Orleans.

You can easily find the hotels where the rate is available by just executing a search. The hotels that have the word “PROMOTION/OFFER CODE” have the triple points rate plan loaded.

Again, this is a great offer for those that can book best flexible rates and don’t mind earning triple points in the process.

I’d like to achieve Marriott Rewards lifetime Platinum. Currently have 620 nights and 1,700,000 points. Only will be traveling for work another year or two. Will be close but am hoping to find opportunities that get me to my goal as quickly as possible.

You can buy up to 50,000 Marriott Rewards points per calendar year that count towards the 2 million points minimum.

I would probably arrange some meetings at your closest property for 10 elite nights per contract. Depending where you are located, you might be able to do these for $100 per “meeting”. Remember that nights over 75 rollover to 2016 and thus would count twice!

You are only 130 nights short of the 750 requirement for the lifetime Platinum. I would definitely try to squeeze the nights in.

As a frequent flier, I am disappointed in a recent experience I had flying on US Airways.

On 6/18/15 I arrived early for my flight (#5339) from DCA to BNA.  The weather was clear and there was no reason to expect any weather delays. Upon checking the electronic display in the terminal, I saw that the flight was listed as “On Time”.  I proceeded to the assigned gate and awaited boarding.

After repeated inquiries from passengers about the status of the flight the gate agent finally admitted to the fact that our equipment had yet to even arrive at DCA.   Knowing this why wasn’t the flight status updated to delayed?  That’s not exactly something that sneaks up on you as an airline?   Speaking for myself, I would prefer honest and transparent communication about my flights status – as opposed to misleading statements and outright lies.

With the gate agent being less than upfront about what was going on with our flight I turned to social media.  I posted the picture I took of the electronic display with the On Time status for a departure time that had already passed.  Coincidently, the board was updated a few minutes later to reflect a new departure time of 9:09 am.

It’s my understanding that as of 9:09 our equipment had still yet to land at DCA.   But yet again, our new departure time came and went without any update.   Attached please find a photo (Flight Status 2) of the electronic display showing a departure time that already passed on a flight that had yet to even begin boarding.

Sometime later our equipment did arrive.  The flight was turned quickly, passengers were boarded, and we were all comfortably shuttled to our destination.   The flight attendant and pilot were both very gracious, admitting to their tardiness and apologizing for the delay.

Equipment problems do happen and are understandable, but you can understand my frustration in that there wasn’t better communication and transparency about the delay by the gate agents at DCA.  Knowing that our equipment was running late due to an unrelated incident earlier in the morning there was no reason the flight shouldn’t have been updated to delayed long ahead of our original departure time.

Yeah. This is annoying as most of the time you could just pass the time at the airline club rather waiting for the “imaginary” boarding at the scheduled time.

Based on my personal past experience, AA is not very good at informing about the realistic departure times when there are delays.

Like you pointed out there is no way that the flight can be on time if the equipment hasn’t even landed when it should have already taken off.

I booked a flight with United points with a 3 hour layover in Seoul. They have now informed me that the flight I booked on has been canceled and put me on a flight that results in a 9 hour layover and a missed connection (which they have taken care of). My question is, am I entitled to any compensation for this? If so, what should I ask for?

What was the flight that got canceled? If it was a partner one, United obviously don’t have control over them.

You could perhaps ask some points for compensation. I would book the Hyatt hotel that is close to the airport for the transit time and send the bill to UA to see what they say.

Even when you have access to the airline lounges, the ones in Seoul aren’t THAT nice and I would never spend 9 hours at them.

Keep the emails and messages coming. I will have these READER QUESTION(S) pieces at least once a week (sometimes more often) and try to cover issues that would help LoyaltyLobby readers