Passengers that use the London’s underground to get around in the city and to/from Heathrow airport should be prepared for a strike that is scheduled to start at 6:30PM tomorrow (July 8) and last for 24 hours. 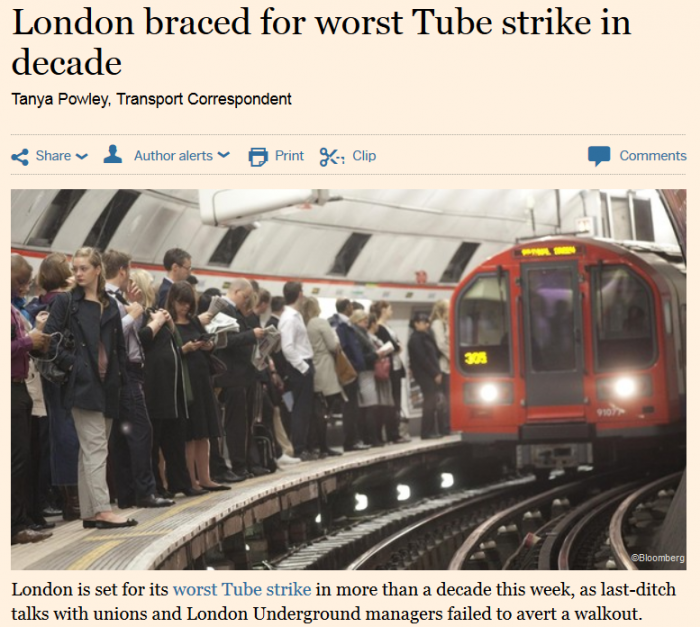 There have been tube strikes previously and some lines have been operation. This time, however, the entire network is expected to be closed for the strike period.

You can read more about this on Financial Times here (below is an excerpt) and on the Independent here.

London is set for its worst Tube strike in more than a decade this week, as last-ditch talks with unions and London Underground managers failed to avert a walkout.

About 20,000 workers are due to strike for 24 hours from Wednesday evening, in a move that is expected to shut down the entire Underground network.

Drivers, who typically receive an annual salary of almost £50,000, are angry over plans for an all-night weekend service from September.

On Monday afternoon, London Underground made what it called a “full and final” pay offer, including a 2 per cent rise this year and £2,000 bonus for drivers on the new all-night service. The original offer included a 0.75 per cent pay rise and a bonus of £250 for Tube drivers.

There could be a last minute resolution and the strike called off, although this looks unlikely at this time.

I have used the underground three times in the past couple of months to get from the airport to the InterContinental hotel. If you have one of those contactless credit cards, just swipe it and you are good to go.