I hadn’t been to Greece for a while and had decided already back in 2014 to finally make it to Mykonos for the 4th of July weekend when some friends from the US usually trek to the island.

With luck, this time period turned out to be at the same time Greece has gone into crisis with the government having no choice but to close the banks for an extended period of time (and they still haven’t re-opened) and when Greeks had a vote on whether to accept the previous bailout package. 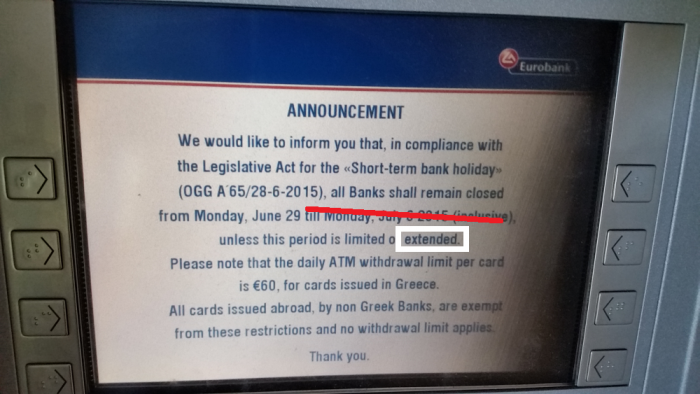 It was business was as usual on this island and all the merchants that I tried to use credit card with continued to accept them. Many businesses, however, were appreciative if you paid in cash because they had no access to Euros from their banks.

This is the second largest city in Greece where I hadn’t been previously (definitely worth a visit) and decided to spend three nights before exploring the Balkans.

You did see lines at the ATMs and all the banks were closed. Quite a few of the ATMs had one security guard standing near them.

The hotel that I stayed at in Mykonos was giving somewhat disingenuous advice to travelers, in that they were advising them not to bring more cash than what one would need for some incidentals etc. and that the ATMs were continuing to work.

The ATMs will work as long as the banks have access to fresh euro notes from the Central Bank while a great portion of the Greek population is withdrawing their daily maximum amount of 60 euros.

If the government doesn’t reach an agreement with the Euro countries this weekend, I doubt that (based on the media reports) that dispensing of euro notes will continue for much longer.

Fortunately, I had withdrawn enough Euros during my short transit in Germany to get me by, had the merchants stopped accepting credit cards altogether.

On a side note coming from one of the more fiscally prudent Euro countries, I truly hope that they won’t throw any more cash to continue fund Greece’s spending. At some point you just have to come to a conclusion that enough is enough.