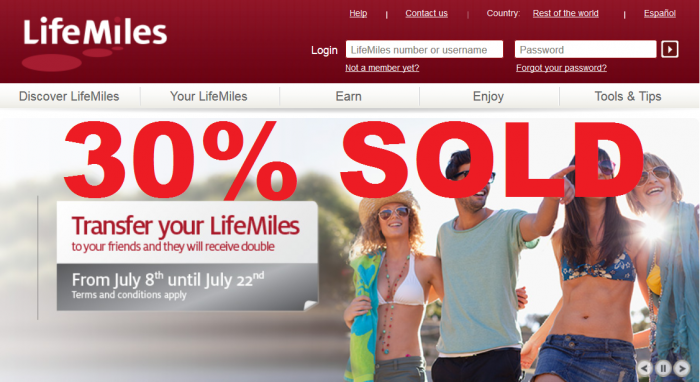 The price of the 30% stake was $340.7 million valuing the subsidiary at more than one billion dollars.

Here’s the email that Avianca sent in Spanish:

Here’s a Google translation to English: 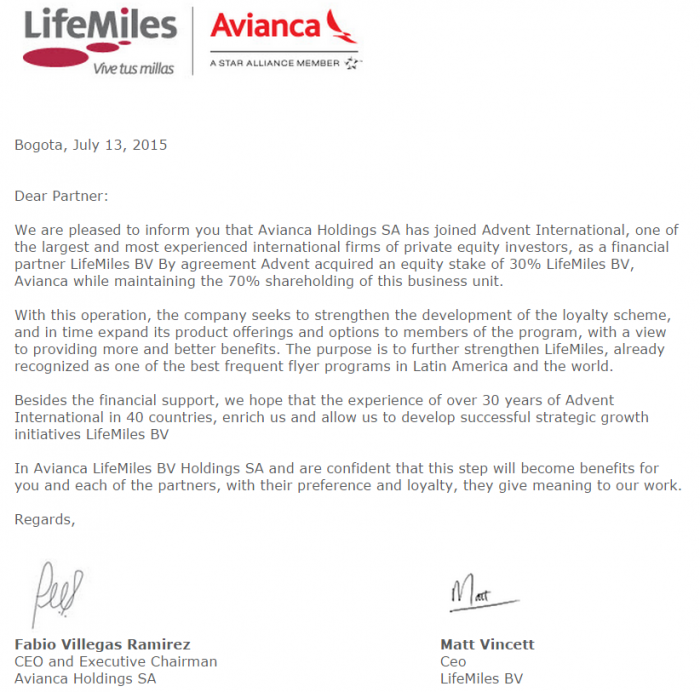 Here’s the press releases from Avianca:

BOGOTÁ and BOSTON, July 13, 2015 – Avianca Holdings S.A. (“Avianca”) (NYSE:AVH) (BVC: PFAVH), the company that integrates several Latin American airlines under the Avianca brand, and Advent International (“Advent”), one of the largest and most experienced global private equity investors, today announced that they have signed a definitive agreement pursuant to which Advent will acquire a 30% minority shareholding interest in LifeMiles B.V. (“LifeMiles” or the “Company”), a standalone subsidiary of Avianca Holdings S.A. In connection with this transaction, Avianca Holdings will receive total proceeds of US$ 343.7 million and will maintain a 70% shareholding interest in LifeMiles B.V., indicating its commitment to the Company’s future development.

LifeMiles is one of the largest and fastest-growing loyalty coalition programs in Latin America with more than 6 million members as of March 31, 2015. Recipient of five Freddie Awards, the program is noted across the industry for its strong value proposition for members and for its innovation in creating best-in-class functionalities and flexibility for members in using their miles. LifeMiles is an important partner for many top-tier banks as well as for an increasing network of retailers across Latin America.

Fabio Villegas, Chief Executive Officer of Avianca Holdings S.A. stated, “We are happy to welcome Advent as our new partner in LifeMiles B.V. This transaction concludes a thorough evaluation process which allowed us to choose Advent as our ideal partner.

Their solid understanding of the loyalty industry and verticals in which LifeMiles operates makes them an excellent long-term partner for the Company. We believe Advent has the right team to help us ensure LifeMiles reaches its full potential, and we look forward to working with them to capture additional opportunities that will benefit customers, commercial partners, and our shareholders.”

LifeMiles has a strong and innovative business model with diversified sources of revenue across multiple geographies. As of December 31, 2014, the Company had relationships with more than 200 commercial partners, 71 mileage agreements with financial institutions and 28 co-branded credit and debit cards. Further, it has developed a retail coalition that allows retailers to reward their customers with miles and facilitates the instore redemption of miles for products sold by participating retailers.

Mauricio Salgar, a Managing Director in Advent’s Bogotá office, stated, “LifeMiles is a strongly positioned business supported by its partnership with Avianca with an innovative set of products and services that appeal to partners and consumers. We are pleased to partner with Avianca Holdings S.A. in supporting LifeMiles´ talented management team as they pursue growth objectives for the business.”

Mario Malta, a Managing Director in Advent’s São Paulo office, added, “We believe LifeMiles will benefit from the fundamental trends in Colombia and other key markets, including continued growth in consumer spending, travel and credit card use. We look forward to sharing our retail, and financial services sector expertise and leveraging our network to accelerate the Company’s growth.”

Advent has been investing in sectors complementary to LifeMiles and its commercial partners for more than two decades. The firm has completed 65 investments in the business and financial services sector and 65 investments in the retail, consumer and leisure sector across 20 countries worldwide. Advent has invested in several fee-based businesses that have been carved out of larger corporations and has shown an ability to create substantial value for its corporate partners.

LifeMiles B.V. is currently the operator of the LifeMiles loyalty program. Avianca Holdings S.A. affiliated airlines as well as banks and retailers operate as commercial partners of the program. LifeMiles is one of the largest and fastest-growing loyalty programs in Latin America, with more than 6 million members and leading market positions in Colombia, Peru and Central America. Recipient of 5 Freddie Awards over the last three years, including Best Redemption Ability, Best Frequent Flyer Program Promotion, and Best Up & Coming Program, the program is noted across the industry for its strong value proposition for Members and for its innovation in creating best-in-class functionalities and flexibility for members in using their miles. Continuing in this tradition, LifeMiles members can now accrue and redeem their miles through a comprehensive retail coalition in , in addition to a partner network including hotels, rental cars, online shopping, online music downloads and much more.

About Advent International
Founded in 1984, Advent International is one of the largest and most experienced global private equity investors. The firm has invested in more than 300 private equity transactions in 40 countries and as of December 31, 2014, had $33 billion in assets under management. With offices on four continents, Advent has established a globally integrated team of over 190 investment professionals across North America, Europe,

Latin America and Asia. Advent is one of the leading private equity investors in Latin America, having raised more than $6 billion for investment in the region from institutional investors globally. Since 1996, the firm has completed 50 investments in Latin America and fully realized its positions in 33 of those transactions. After more than 30 years dedicated to international investing, Advent remains committed to partnering with management teams to deliver sustained revenue and earnings growth for its portfolio companies. For more information, visit www.adventinternational.com

Avianca here is following GOL and TAM that sold/spun off their loyalty programs in the public market and those are now valued more than the airlines themselves (doesn’t make much sense).

The research report noted that LifeMiles collected in 2013 $142M from miles sales to third parties. Wonder how much of that was miles sales when the award charts were good? I certainly purchased their miles back then.

I am not sue if I am alone here (old fashioned), but I would prefer that airline and hotel loyalty programs would reward those that actually fly on airlines and stay at hotels.